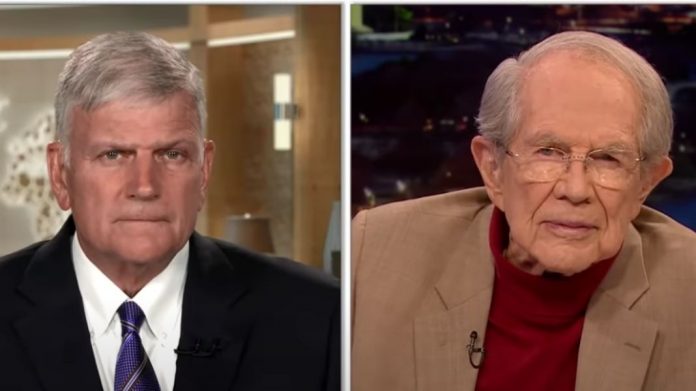 Franklin Graham, son of famed evangelist Billy Graham, has become a spiritual leader in his own right among millions of Evangelical Christians across the country.

The main difference between the two is that Franklin Graham is more willing to get involved in politics than his father.

And Franklin Graham just issued a stark warning about Democrats’ plan for America.

It’s no secret that the far-Left in America have embraced socialism and even rioting and violence in pursuit of political change during Donald Trump’s Presidency.

But in the wake of Geroge Floyd’s death things have spiraled out of control.

In Seattle, a city managed by radical left-wing socialists, a six-block region in the center of the city was temporarily controlled by a Marxist group who set up what they called the “Capitol Hill Autonomous Zone” (CHAZ) – a self-proclaimed “independent” space.

The mayor actually instructed police to stand down and allowed these rioters to freely roam for weeks until a violent weekend with multiple shootings forced city officials to retake the area.

President Trump was forced to send in U.S. Marshals and Customs and Border Patrol agents to protect a federal courthouse in the city after rioters repeatedly tried to burn it down.

Now, Franklin Graham is issuing a warning about Democrats’ plan for America if they seize control of Washington, D.C. in 2020

“Socialism is dangerous, and we have a party and many politicians who are flirting with all-out socialism… Portland is an example of what will take place in other cities if Americans do not take a stand in defense of the nation – through the power of the vote,” Graham warned.

Graham continued on to encourage Christians to pray for our country and turn out the vote to stop Democrats from destroying the country.

Rev. Graham’s concerns about the future of our country and what the Left is doing to our culture are completely warranted.

Democrats have somehow managed to make rioting, looting, burning down private businesses, and despising our men and women in police uniforms mainstream.

These are dangerous ideas that can tear apart the fabric of a functioning society apart.

Graham is calling upon Christians to pray – and turn out to vote – in hopes of turning the tide against socialism.