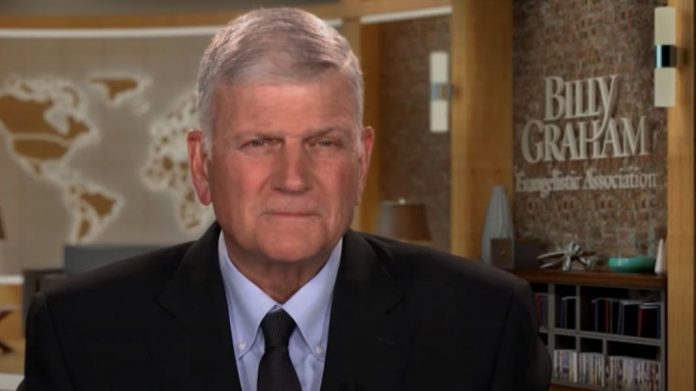 Rev. Franklin Graham, the son of Billy Graham, has made himself known for standing up to the radical Left in the era of Donald Trump’s Presidency.

And his latest act of courage, will send many militant atheists and leftists into a temper tantrum.

That’s because Franklin Graham is inviting tens of thousands of Christians to Washington, D.C. in order to do something that will drive the Left crazy.

Since the coronavirus panic, politicians have been using the virus as an excuse for excessive government overreach . . . including shutting down churches.

Kentucky’s Governor Andy Beshear even deployed officers to monitor churches on Easter morning and write down license plates to identify who was breaking the rules.

Naturally, these actions have created an uproar within the Christian community and spiritual leaders have begun resisting the draconian lockdowns.

That’s one reason why Franklin Graham has decided to take things to a new level.

Graham is inviting thousands of Christians to descend upon Washington, D.C. in late September to do a prayer march on the National Mall.

This is the last thing that militant atheists and radical left-wing politicians want to see in the news.

Thousands of Christians praying for the United States, economic recovery, and the restoration of their basic religious liberties enshrined in the First Amendment does not make for a good day in the press for those pushing the lockdowns.

The prayer march will also ask for healing and for an end to the coronavirus.

Peaceful protests are only the beginning of the resistance Christians are beginning to engage in.

Several lawsuits have been filed against state governments and counties that could potentially undo nearly all lockdown restrictions against religious establishments.

Graham’s efforts are being applauded by dozens of other Christian leaders including Jack Graham and Ronnie Flyod.

Christians are ready to have their rights fully restored.

These efforts are poised to grow quickly and if state governments do not relent on their lockdowns against churches, typically law-abiding Christians may embrace the ancient tradition of civil disobedience.