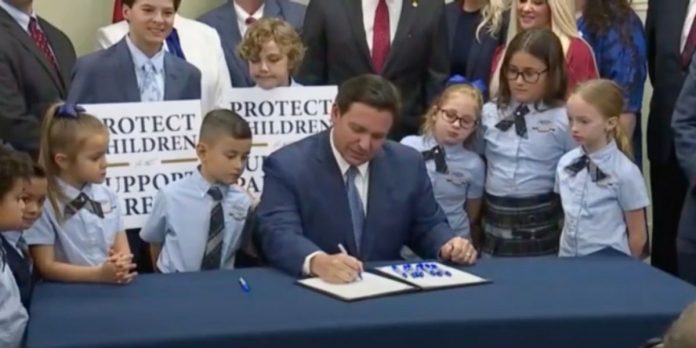 Disney got into politics in the wrongest way possible.

They decided to get “woke” on a perverse agenda and alienate half their audience.

And FOX Business just delivered a devastating message from Ron DeSantis to Disney.

“Disney is poised to rank among the worst-performing stocks in 2022 after the company became embroiled in a high-profile political controversy,” FOX Business reported Friday.

The collapse of Disney stock comes amid the Left losing its collective minds after Florida Governor Ron DeSantis signed the Parental Rights in Education bill into law.

Somehow a bill that simply prohibits in-class discussions about sexual orientation and gender identity in grades K-3 became controversial after Republicans got over the target regarding radical gender ideology being taught in schools.

Leftists thought Disney would help them win the culture war over queer theory and the company attempted to use its muscle to strongarm DeSantis in abandoning the bill, but the gambit backfired.

FOX Business reported that “The Florida House of Representatives passed a bill Thursday that would dissolve Walt Disney’s special governing power in the state, a move that could have huge tax implications for Disney, one of the state’s largest private employers with more than 60,000 workers,” FOX Business reported.

Disney made the mistake of wading into politics when they had no reason to do so.

New CEO Bob Chapek originally wanted to stay out of the fight over the Florida bill, but he was hectored into submission by woke employees within the company.

An intransigent minority within a company can do considerable damage if there isn’t strong leadership in place.

DeSantis said of the bill, “What I would say as a matter of first principle is I don’t support special privileges in law just because a company is powerful and they’ve been able to wield a lot of power… I think what has happened is there’s a lot of these special privileges that are not justifiable, but because Disney had held so much sway, they were able to sustain a lot of special treatment over the years.”

Walt Disney World’s special governing power in the state will now be dissolved after Ron DeSantis signed a measure into law on Friday evening.

Republicans are finally fighting back in the culture war.

Perhaps businesses will stop getting involved in politics and focus on serving their customers.