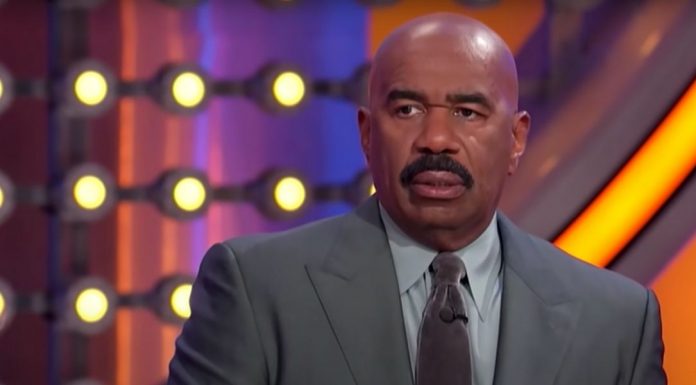 American culture is under relentless assault.

But Family Feud’s Steve Harvey just took a sledgehammer to the joke police.

Steve Harvey admitted the sad truth behind why he stepped away from stand up.

Comedian Steve Harvey is speaking out against cancel culture that has intimidated content creators into toeing the progressive line.

Sadly, he did so while admitting it’s the reason he stepped away from stand up.

“The only way I can do one more special is if it’s at the end of my television career because it will end my television career… We’re in the cancel culture now… No stand-up that is sponsor-driven can say anything he wants to… Chris Rock can’t. Kevin Hart can’t. Cedric the Entertainer can’t. D.L. Hughley can’t. I can go down the list… The only person that can say what they want to say on stage is Dave Chappelle because he’s not sponsor-driven… He’s subscription-driven,” Harvey told Variety.

Harvey is the host of Family Feud and the new daytime show Judge Steve Harvey, so his television career could go up in flames if he veered too far outside what the woke mob considers allowable jokes.

Dave Chappelle has been harassed endlessly for telling jokes about transgender people. That’s too far for the Left, even though he tells jokes about every other group.

But according to suffocating “woke” culture, comedians are prohibited from telling jokes about “marginalized peoples.”

Even Chappelle has paid a price for his comedy.

He could not get distribution for a documentary he produced because everyone dropped him.

The “woke” leftists believe that telling jokes about “oppressed” groups is an example of punching down. But the Left is never triggered by jokes and actual smears directed at straight, white, Christian, conservative males.

“We can’t write jokes about puppies all the time…The joke can’t be about bushes all the time. Some of these jokes will have to be about people, because that’s the most interesting topic… So if I come back, I’ll have to wait until I’m done. And I’m not done. I want to do one more. I’ll probably have to call it ‘This Is It.’”

Comedians are often the canary in the coal mine.

Jerry Seinfeld and Chris Rock were two of the first major comedians to notice the trend in censorship.

Both said they stopped playing at colleges because of “woke” university students.

Now all of society has become the university campus.