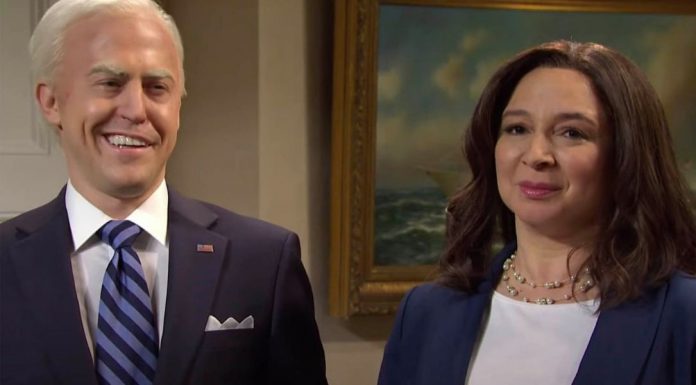 Movies and television shows skewered Donald Trump and the Republicans for four years.

Meanwhile, the Democrats were mostly spared from derision.

Saturday Night Live has always leaned Left, but the show became obnoxiously political over the past four years.

That wouldn’t have been a problem if the show hadn’t been so one-sided in its political attacks.

But the show finally went after Joe Biden in light of his disastrous first press conference.

Biden (played by Alex Moffat) shows up at a dinner hosted by Kamala Harris (Maya Rudolph), and he immediately brags about his presser.

“​Hey, did you all catch my press conference? It was so easy. A lot of critics thought I wasn’t mentally prepared enough​.”

He then reads off a cue card, “But I think I proved them all wrong.”

It was even worse at the actual press conference as Biden had journalists numbered and circled while he read from a script.

How do you feel about this, journos?

Biden and Harris will give SNL and other comedy shows plenty of fodder to work with if they’re willing to use it.

Biden’s gaffes continue to pile up, and Harris has the unsettling nervous tick of laughing maniacally when she doesn’t know how to answer a question.

With Trump no longer around as the whipping post, Democrats are looking for a boogeyman to elevate and demonize.

So far, they haven’t found anyone, which is why the news media is struggling without the “Trump bump.”

The Huffington Post and other digital platforms have had to dramatically slash staff without Trump driving clicks.

And it turns out, the liberal writing staff at SNL will have to work a little bit harder, too.