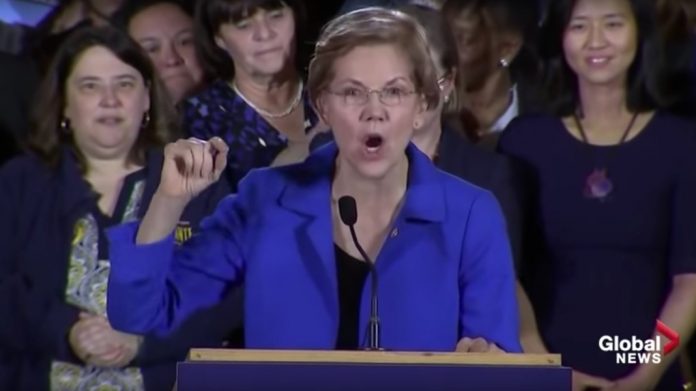 They’re concerned that they can’t defeat him at the ballot box in 2020.

And now Elizabeth Warren landed one campaign endorsement that could hand the election to Trump.

The socialist takeover of the Democrat Party is near complete.

And the candidate who could be primed to be the party’s nominee, Elizabeth Warren, is farther Left than Hillary Clinton.

Joe Biden still maintains a slight lead in the polls, but with the mainstream media knee-capping him any chance they get, there’s a dwindling belief he’ll make it all the way to the Democratic National Convention next year.

Warren is nipping at his heels with her insane socialist agenda, but she has a huge problem because she has virtually no support among black voters.

So she was excited to tout a new endorsement that could push her ahead of Biden.

Thank you, @BlackWomxnFor! Black trans and cis women, gender-nonconforming, and nonbinary people are the backbone of our democracy and I don’t take this endorsement lightly. I’m committed to fighting alongside you for the big, structural change our country needs. https://t.co/KqWsVoRYMb

Warren’s response to the endorsement is just loony.

She claims that a splinter group of a fringe movement is the “backbone of our democracy.”

If Warren thinks she’s going to win over rust belt voters by telling them that transgender and non-binary people are the backbone of democracy, she’s got another thing coming to her.

He’s under constant assault from big media, yet the Democrats still find a way to look worse to voters.

Warren is doing her best to pander to the Democrat base, but pandering to extremists will make her unelectable in a general election.

Even lifelong Democrat Bill Gates issued a veiled threat that he might not be able to support her because of her insane anti-business policies.

The 2020 race is looking a lot better for Trump.

Do you believe this endorsement will hurt Elizabeth Warren with middle America?