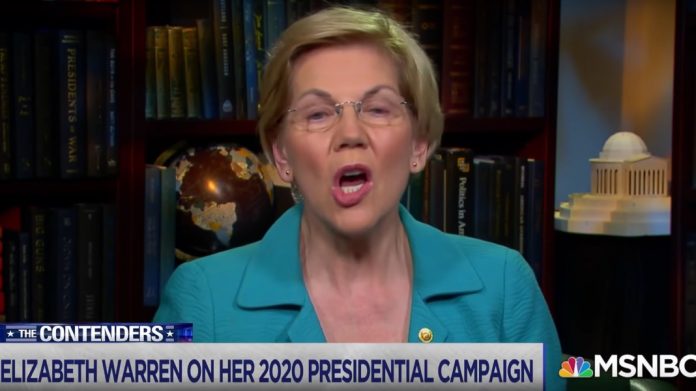 Leftists are losing their minds over the stunning draft SCOTUS decision to overturn Roe v. Wade.

But one Senator couldn’t be happier.

Because Elizabeth “Fauxcahontas” Warren just let slip the most insane defense of January 6 ever.

America is in a precarious place as leftist forces continue to batter the very foundation of our nation’s success.

A combination of constitutionally protected freedom and law and order made America a haven people from around the world aspire to join.

But starting months before the 2020 presidential election powerful leftist forces started hammering away at the very basis of what has made the American way of life enviable for most of the country’s existence.

The downfall of American society burst onto the scene in blue cities around the country when Black Lives Matter riots — led by self-described Marxist leaders — started tearing apart one community after the next.

Then President Donald Trump battled with his respect for the rights of states under our Federalist form of government with an almost irresistible urge to send in the military to stop the absolute destruction of America’s urban centers.

That was quickly followed by a coordinated effort by Democrats and corporate-controlled media companies to absolutely suppress anything that could keep the thoroughly corrupt Biden family out of the White House.

Elizabeth “Fauxcahontas” Warren was part of it all despite the Senator who even Bernie Sanders called a liar having to swallow her own Presidential ambitions so Biden could win.

“Disinformation and online foreign interference erode our democracy, and Donald Trump has invited both."
—@SenWarren 1/29/20

But now her ambition and willingness to lie are back on full display thanks to the leak of the draft Supreme Court decision to overturn Roe v. Wade.

Because shortly after Joe Biden announced the creation of a “Disinformation Board” within the Department of Homeland Security, America has been hit with yet another sign of corruption within the US government.

It’s all thanks to the leak of the draft decision of what’s likely to be one of the most important United States Supreme Court Decisions ever has been leaked from the offices of the nation’s most important judicial body.

It’s a stunning break of confidence that opens up the Court to all kinds of politicking ahead of making a final decision that’s been strictly off-limits in the past.

Chief Justice John Roberts has ordered an investigation into how a 98-page draft of the court’s upcoming decision that could overturn Roe v. Wade and allow states to make abortion illegal again was leaked and published by Politico.

Roberts called it a “betrayal of the confidences of the court” and ordered the Marshal of the Supreme Court to investigate the extremely rare and disturbing breach of security.

The massive scandal comes on the heels of Democrats celebrating the appointment of radical leftist Justice Ketanji Brown Jackson to the nation’s top court.

Leftists are in a panic knowing they can manipulate two branches of the federal government through political maneuvering, but with several relatively young justices given life appointments by Republican presidents they’re facing an uphill battle to control the judiciary.

But they’re still doing their level best with long-shot attempts like suggesting Justice Jackson take the lead in introducing term limits to the Supreme Court.

With their ability to successfully cultivate a cultural leftist drift, Democrats know their best chance to gain control is to increase the number of opportunities for change.

In the meantime, leftists are staging a massive outcry against what looks like a massive defeat for their baby-killing agenda.

Senator Elizabeth Warren is leading the squad of leftist crazies.

Time to investigate @SenWarren for calling for a insurrection towards #SCOTUS pic.twitter.com/6LQmKr3gfO

Of course, she may have ulterior motives.

You can almost see dreams of riding this all the way to the Oval Office spinning through Warren’s head as she trampled life under foot out front the Court this week.

It’s worth noting that while Democrats threw a massive fit over the January 6 riot almost nobody is sounding the alarm over the May 3 Supreme Court breach.

At least some folks see the irony.

"They have not yet breached the building, however, as Capitol police have not opened the doors for them." https://t.co/jDLYPCfCJ0 via @TheBabylonBee

This young woman and many like her not so much.

How many of the women rallying against overturning Roe are over-educated, under-loved millennials who sadly return from protests to a lonely microwave dinner with their cats, and no bumble matches?