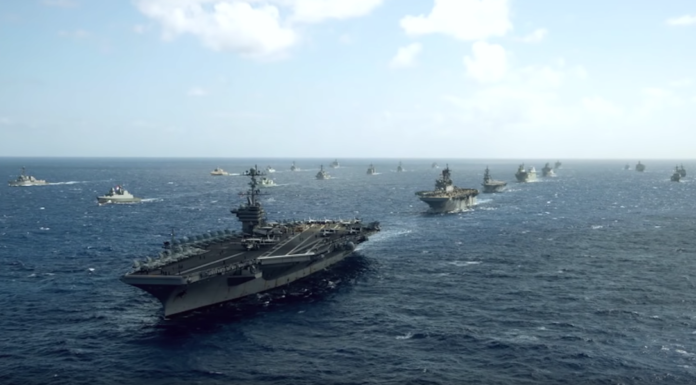 The US Military has led the world in staring down global threats over the last century.

But the world is now in flux once again.

And the elite Navy SEALS got hit with devastating news just as the military comes to grips with the daunting organizational threat of Biden’s mandates.

On Christmas Day the world lost a naval legend.

According to his son, “The Rogue Warrior” Richard “Dick” Marcinko died a true legend.

And the Navy SEAL Museum says the 81-year-old left “a legacy like no other.”

The elite special ops group is best known in recent years for having swept in to take out Osama Bin Laden.

But “Demo Dick”, as the Navy SEAL Museum put it, was “considered the United States’ premier counterterrorism operator.”

He was one of two Navy Representatives for a Joint Chiefs of Staff task force called the Terrorist Action Team who were tasked with figuring how to free hostages in Iran.

After Desert One, a failed rescue attempt that no doubt haunted military commanders for decades, Marcinko was put in charge of designing and developing a full-time counter-terrorism unit.

So, what happened to Navy SEAL teams three through five?

Apparently, Marcinko added the “six” onto the unit’s name to try to trick the Russians into thinking the US had three more special ops units than actually existed.

While making the elite ops team may be seen as the pinnacle of success for ambitious Navy recruits, Marcinko had to pull the original group together in a mere six months or the project would have been cancelled altogether.

SEAL Team Six was officially dissolved in 1987 and then put into the Naval Special Warfare Development Group known as DEVGRU.

While the number of platoons in other Navy Seal teams are publicly known, exactly how big Team Six is in its current form is classified information.

Of course, the special ops group has become an integral part of military strategy and American culture with plenty of Hollywood productions based on the group’s incredible missions.

After setting the stage for how military special ops groups would take shape and rise in prominence in the US military, Marcinko retired from the Navy in 1989.

His first book, Rogue Warrior, sold millions of copies and inspired a series of 16 additional books produced with the help of two co-authors.

Marcinko was born in a tiny mining town in Pennsylvania. The New York Times quoted him as having written that all the men in his family were miners, “They were born, they worked the mines, they died. Life was simple and life was hard, and I guess some of them might have wanted to pull themselves up by the bootstraps, but most were too poor to buy boots.”

Marcinko not only pulled himself up by his bootstraps, but also made a name for himself with military honors including four Bronze Stars, a Silver Star, and a Vietnamese Cross of Gallantry.

He is survived by his wife, two sons, and four daughters.

The passing of SEAL Team Six creator is devastating news for morale at a time when the Navy and the whole of the US military is facing the daunting organizational and morale-sapping threat of Biden’s vaccine mandates.