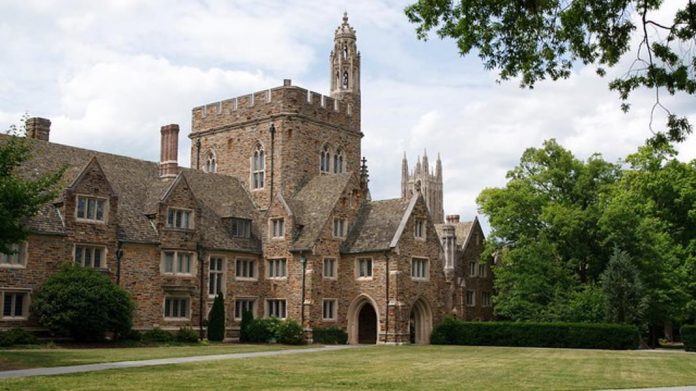 Religious freedoms in America are under constant assault.

Now Christians at Duke University are being shut down in a despicable way.

Far-Left activists have slapped a massive target on the backs of Christians.

If it’s not Christian bakers, florists, photographers, or actors, it’s someone else.

Devout Christians on college campuses are particularly under fire.

And now Duke University is denying a Christian group recognition from the school by arguing they must allow gay students to be in leadership roles even though that violates their religious beliefs.

Duke University’s student government senate voted to deny recognition to a Christian group on Wednesday because of its leadership team requirements, which do not allow LGBT members to be on the leadership team.

Members of the student senate raised concerns about Young Life’s policy, according to The Duke Chronicle. The senate also talked about how this could discourage people who are LGBT from joining the club.

Rachel Baber, a Young-Life leader for Durham-Chapel Hill, said that the organization does have an “anti-discrimination clause” and will not stop LGBT people from joining the organization, according to the report.

So gay students are perfectly welcome to join the group, but that isn’t enough for the activists.

They must have total and complete control.

We’ve seen this with the case of Jack Phillips, the Christian baker in Colorado whose case went all the way to the Supreme Court.

Leftists are still going hard after him.

The war on Christianity is a serious problem in America.

Far-Left activists have chipped away at the foundation of Christianity for a long time.

Atheistic societies have been the most brutal in human history, responsible for over 150 million deaths in the names of socialism and fascism.

Karl Marx, the Left’s prophet, commented that religion was the “opium of the people.”

He and other Leftists understood that religious people are far less likely to buy into the disturbing vision of socialism, an ideology that views human beings as disposable.

Religion also goes hand-in-hand with family values, and the far Left has been trying to destroy the family for decades.

Second-wave feminists from the 1960s openly stated the family was an oppressive structure that needed to be dismantled.

The Left has a plan to erode family values that they’ve been implementing for decades.

That’s why cultural battles like the one at Duke matter.

Do you believe Christianity and family values are under assault?

Join the conversation by leaving your thoughts in the comment section.