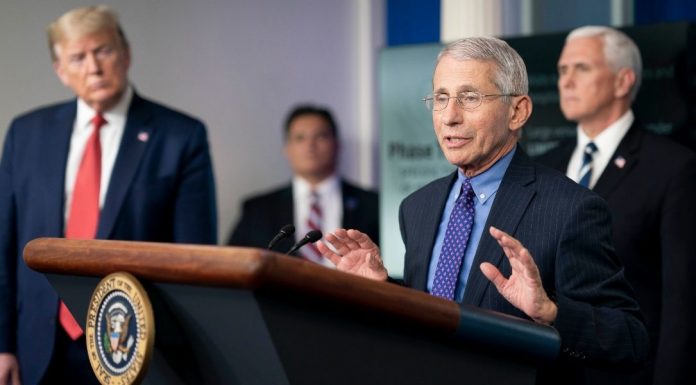 Countless Americans have lost their jobs and livelihoods are a direct result of government imposed lockdowns.

And many Americans are tired of it after altering their Thanksgiving plans to pacify newly implemented lockdowns.

But now Dr. Fauci is auditioning for a new role as the Grinch who stole Christmas.

2020 has been an awful year for many Americans.

Adverse effects from coronavirus were just made worse by government enforced lockdowns.

Countless Americans have been affected by the lockdowns and thousands lost their livelihoods.

And nothing changed for Thanksgiving as many areas in the nation forced small businesses to close and did everything they could to stop holiday gatherings from happening.

As a result, dinner tables were empty as many stayed home over Thanksgiving to reluctantly follow the newly implemented lockdowns.

But even with the sacrifices Americans have made, it isn’t enough for Dr. Fauci.

Earlier this month Dr. Fauci had the nerve to claim that Americans are too independent when he claimed, “I was talking with my U.K. colleagues who are saying the U.K. is similar to where we are now, because each of our countries have that independent spirit. I can understand that, but now is the time to do what you’re told.”

Now Dr. Fauci is claiming that we need to cancel Christmas.

Fauci told the USA Today, “If the surge takes a turn of continuing to go up and you have the sustained greater than 100,000 infections a day and 1,300 deaths per day and the count keeps going up and up . . . I don’t see it being any different during the Christmas and New Year’s holidays than during Thanksgiving.”

When will people have enough of the government telling them what to do with their holiday plans?