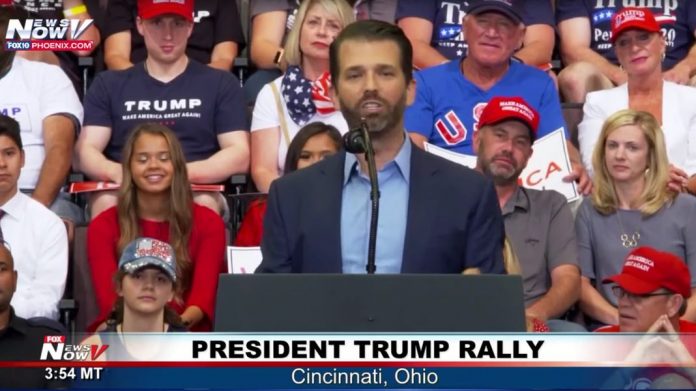 Radical Leftists are trying to normalize transgenders in American culture.

But questions about transgender performers in sports are on the rise.

And Donald Trump Jr. just spoke one truth about transgender athletes that too many people refuse to admit.

There are biological differences between men and women.

Not long ago, that was understood by everyone and taught as such in biology, anatomy, and health classes at every single educational level.

But the radical Left is trying to sow chaos and shake the underpinning of America’s culture by forcing Americans to accept transgenders as “normal.”

And the Left’s new push to normalize what is little more than mental illness, is having serious ramifications in various parts of society.

The area of sports has become a heated point of contention, and Donald Trump Jr. dropped a tremendous truth bomb on the radical Left.

He shared on Twitter that allowing transgender females to compete in women’s sports will destroy their sports and that he ‘couldn’t care less how you identify.

Anyone want to guess why???
This BS will destroy women’s sports and everything so many amazing female athletes have worked their entire lives to achieve.
I couldn’t care less how you identify, but this isn’t right. https://t.co/oxLQip9pqR

Trans activists try to argue there aren’t any biological advantages for a trans woman, but that is preposterous.

On average, men are taller and have greater lung capacity, narrower hips, and denser bones.

These differences are much more pronounced at the higher ends of athletic competition.

McKinnon isn’t the only example.

That has repercussions on not only championships, but also recognition for athletic scholarships.

Ironically, a certain sect of Leftists, gender-critical feminists, have been some of the harshest critics of the transgender movement.

They call it “female erasure” when a man can simply claim he’s a woman and take over women’s sporting events, shelters, and other areas.

You can’t embrace Leftist values without chaos, and perhaps these feminists are learning that lesson too late.

Should biological males be allowed to compete in women’s sports?