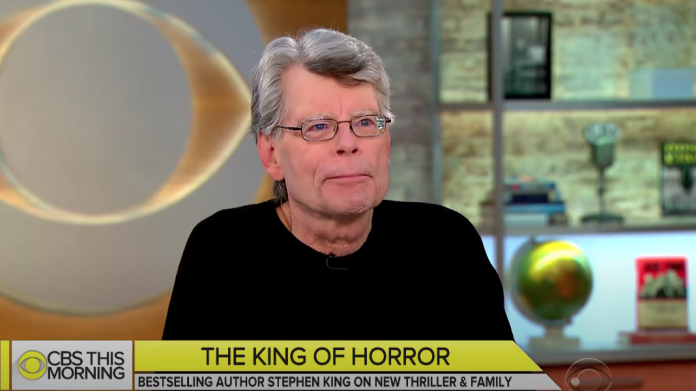 America is a celebrity-obsessed country – just look at shows like TMZ for evidence.

However, celebrities – for some reasons – think the public cares what they have to say about politics.

So Donald Trump is laughing at these five words from horror author Stephen King.

Horror author Stephen King has a history of speaking out, but his latest comments aren’t likely to strike fear in the heart of Donald Trump.

Stephen King has a penchant for writing long novels.

In fact, his longest book, The Stand, is a full 1,152 pages – heck, it’s twice been made into television mini-series.

Even King’s shortest book, The Cycle of the Werewolf, is 127 pages.

However, when the horror story writer recently took to Twitter to make his latest attack against former President Donald Trump, King kept it short.

Hardly an articulate argument from such a master of the written word.

Who knows what crime for which King believes Trump should be imprisoned.

And despite several witch hunts searching for any reason to get Trump, no charges have been filed for any accusation against the former President.

However, King is clearly obsessed with the 45th President of the United States.

Trump has blocked me from reading his tweets. I may have to kill myself.

A quick Google search can find lists of 100 times King has tried to “burn” Trump on Twitter.

King was obviously triggered by Trump blocking him.

In an act of “revenge,” the novelist “blocked” Trump from seeing his It remake.

The so-called, “King of Horror,” is still employing the antics of someone who is trying to troll someone else on Twitter.

However, Trump isn’t taking the bait.

For one, Trump is no longer on Twitter after becoming the first President banned on the platform.

Trump is not known for letting critics get off scot-free.

But the leader of the Conservative-populist movement hasn’t responded to King’s constant harassment.

This is clear evidence how little Trump cares about The Shining author’s opinion.

The former President knows, sometimes the best way to put a troll in his place is to ignore him – something that must infuriate King.

For Trump, he doesn’t mind because King doesn’t matter.

Let’s hope the author’s next foray into “owning” one of his political opponents on social media is at least as creative as Pet Cemetery – otherwise, shut up and write another book about a cozy Maine town with a dark secret involving supernatural evil.

That’s every Stephen King book summed up in ten words.