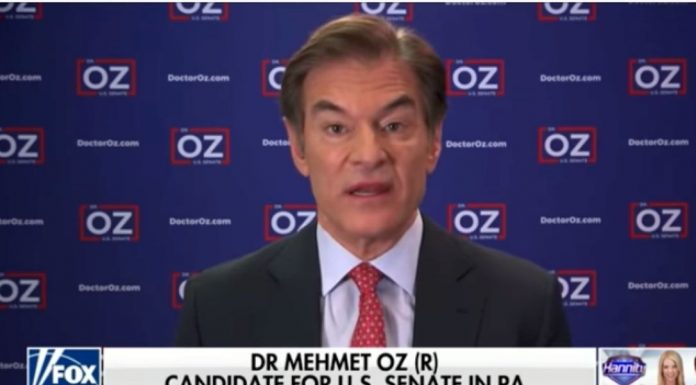 But all hell just broke loose for the star who not so long ago Democrat elites considered a shoo-in if she ever ran for the White House.

And Oprah is furious after Donald Trump did one thing that has the woke mob all over her.

Donald Trump made a surprise announcement that has the woke mob going after Oprah Winfrey.

Democrats are programmed to blindly rail against anyone and anything Donald Trump might approve.

So after Trump endorsed Dr. Mehmet Oz in the US Senate race in Pennsylvania, leftists took after Oprah on social media.

Oprah and Dr. Oz are longtime friends and he got his start in television as a serial guest on Oprah’s show.

Despite much criticism from many on the Right who insist Trump made a bad call and that Oz is no America First conservative, leftists are still demanding that Oprah denounce him.

Oz is hoping to take the US Senate seat opened up in Pennsylvania by the retiring Pat Toomey.

Trump created a huge uproar over his surprise endorsement of Oz.

“This is all about winning elections in order to stop the Radical Left maniacs from destroying our Country,” Trump said in a statement, according to NPR. “I have known Dr. Oz for many years, as have many others, even if only through his very successful television show. He has lived with us through the screen and has always been popular, respected, and smart.”

Trump appointed Oz to the President’s Council on Sports, Fitness & Nutrition back in 2018 but on March 23, after Oz announced he was running as Republican for Senate, Biden’s White House demanded he resign by the end of the day.

“Clearly, Joe Biden can’t be around anyone who doesn’t completely fall in line with his fear-mongering authoritarian one-size-fits-all COVID handling,” Oz wrote in a Tweet. “I am proud of my service and will not resign.”

As a major celebrity, Oz made quite a splash in conservative circles when he finally turned against the Covid Regime’s oppressive vaccine and mask requirements after praising Dr. Fauci and insisting America use China’s lockdown “blueprint.”

Dr. Mehmet Oz says Dr. Anthony Fauci is a “pro” and “I respect him a lot” https://t.co/eefPFXRnNw

Dr Oz on the CCP’s brutal lockdowns in Wuhan

“We have to copy what they did. Take their blueprint and repeat it here in this country”
pic.twitter.com/2sVDXw43z0

Of course, since announcing his bid for Senate, Oz has cleaned up his image.

But there’s no hiding that Trump’s decision to endorse the wealthy celebrity doctor remains controversial in conservative circles.

Oz put $5.3 million of his own money into his primary campaign last year alone and if he is elected, he’ll be one of the wealthiest members of the Senate.

Pro-life advocates have dug up evidence showing Oz is in favor of abortion and has even claimed that a six-week-old fetus’ heartbeat is merely an “electrical charge” in a “cell.”

That along with being an early supporter of gender identity changes in young children has many conservatives absolutely appalled.