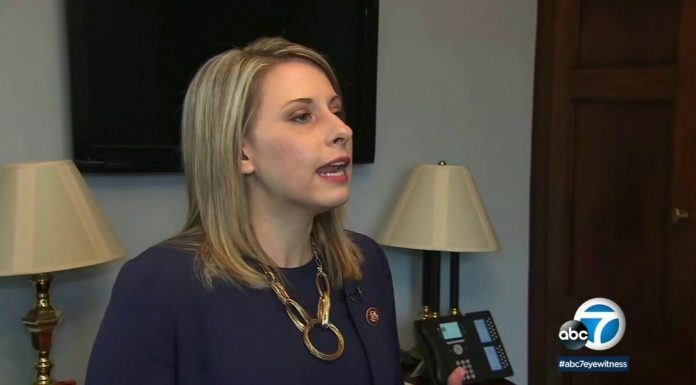 Who can forget the headlines of Katie Hill leaking nude photos and sleeping around with practically everyone in Washington, D.C.

Well, after her fall from fame, she decided to target some conservatives after they exposed her deviant sexual life while on the taxpayers dime.

But the disgraced ex-Congresswoman Katie Hill continues her streak of getting screwed as she takes another loss in court to conservatives.

It’s almost as if the worst types of human beings our nation can produce end up at our nation’s Capital.

And one of the most unforgettable stories from 2019 was one of the biggest scandals that Washington, D.C. has seen for years.

Rising star among the Left, Congresswoman Katie Hill of California, was caught having an affair with what seemed like nearly everyone on her campaign staff.

Nearly every campaign staff member in her inner circle was getting more than just a salary from Katie Hill.

And Katie Hill is the same person who has accused former President Donald Trump of being a sexual predator.

But, thankfully for the conservatives, the Judge over the case was having none of it.

Judge Yolanda Orozco in Los Angeles County’s Superior Court ruled that, “[t[he facts of which these photos speak are about plaintiff’s character, judgment and qualifications for her congressional position. Of course, these are matters of public concern.”

But that’s not the worst of it for Hill.

She was ordered by the court to pay the legal fees of the conservative defendants that totals to $200,000.

And Hill went on social media to attack the ruling by the court.

She claimed, “A judge just ordered me to PAY the Daily Mail more than $100k for the privilege of them publishing nude photos of me obtained from an abuser. The justice system is broken for victims.”

A judge just ordered me to PAY the Daily Mail more than $100k for the privilege of them publishing nude photos of me obtained from an abuser.

The justice system is broken for victims.

Our fight continues – please chip in if you can: https://t.co/qKaSPpC2nq#BoycottDailyMail

Literally, all Hill had to do to avoid her streaks of losses was just not to sleep with her campaign staff.

But on her Twitter page she claims she is “not done yet.”

Let’s hope for her future campaign staff that she is at least done with politics.