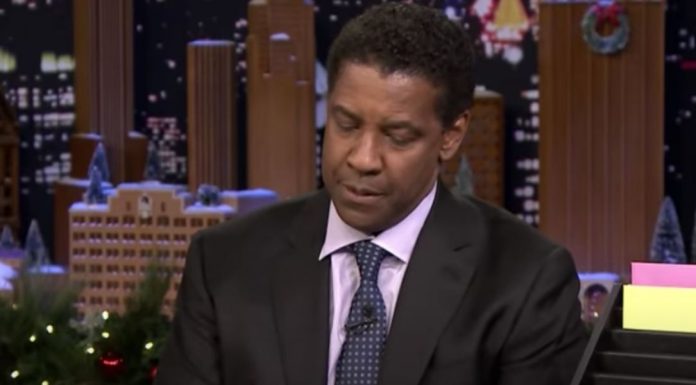 But some buck the trend promoting leftism.

And Denzel Washington gave one speech that made leftists squirm.

In a town that’s openly hostile toward Christianity, Washington has always been forthright about his belief in God.

Washington gave a speech at the Better Man Event sponsored by First Baptist Orlando where he reflected on his four decades in Hollywood.

“What I played in the movies is not who I am, it’s what I played . . . I’m not going to sit or stand on any pedestal and tell you about what I had in mind for you or your soul. Because the fact of the matter is, in the whole 40-year process, I was struggling for my own soul.”

That’s a far cry from the leftist homilies from celebrities who lecture Americans about climate change or socialism or any other trendy cause.

Jet-setting multimillionaire celebrities have the audacity to preach down to the rest of the country while they fly privately around the world.

“[The Bible] says in the last days we’ll become lovers of ourselves. The number one photograph now is a selfie. So we all want to lead. We’re willing to do anything – ladies and young men – to be influential . . . Fame is a monster and we all have these ladders and battles, roads we have to walk in our given lives. Be you famous or whoever’s out there listening, we all have our individual challenges. It’s cliché [but] money, don’t make it better. It doesn’t. Fame just magnifies the problems and the opportunities.”

Those are strong words in the face of a celebrity culture that reveres fame.

Not only does Washington not preach about politics, he goes out of his way to keep his politics close to his chest.

In 2016, Washington told a reporter on the red carpet that it was none of his business who he voted for.

Washington has also said many times that fatherlessness is the biggest obstacle in the black community, which is verboten on the Left.

Democrats want every single problem to be attributable to American racism from decades and centuries past.

Regardless of Washington’s politics, it’s refreshing to hear a celebrity who doesn’t believe it’s his mission to tell everyone else what they’re supposed to think about political issues.