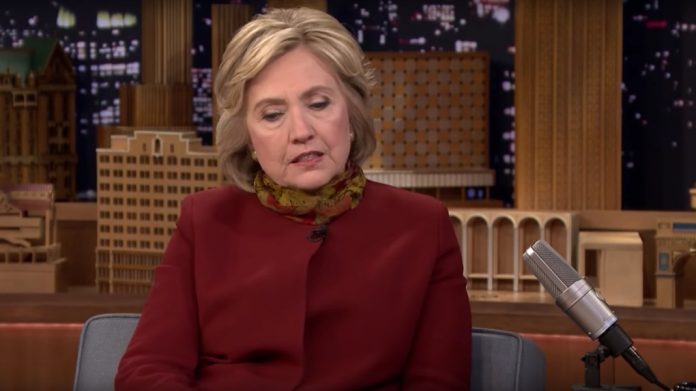 Hillary Clinton refuses to go away.

The Democrat Party looks hellbent on letting Clinton haunt American politics for the rest of her life so she clearly knows where bodies are buried.

Now they’ve got Hillary Clinton and this Hollywood star teaming up for a showdown on elections that will leave you scratching your head.

Hillary Clinton thought she was a shoo-in for the presidency in 2016.

She had the establishment of both parties supporting her, and a myriad of celebrities endorsing her.

But it wasn’t enough.

Since then, Clinton has blamed her loss to Donald Trump on everything from the Russians to wives being coerced by their sexist husbands into voting for Trump.

Clinton even blamed the corporate-controlled press for suppressing turnout by saying she was so far ahead.

Needless to say, Clinton took her election loss badly, and she refuses to fade into the background.

She’s now teaming up with celebrity “luminaries” – like Hollywood has been and Matt Damon talent leech Ben Affleck – for a fundraiser on so-called “voting rights,” which is code for Democrats’ attempts to permanently enshrine the lax and fraud-prone voting rules they used the pandemic as an excuse to put in place in 2020.

Even after two failed presidential bids, Hillary Clinton is still a magnet for left-wing Hollywood celebrities. Ben Affleck and ABC’s Black-ish star Tracee Ellis Ross are reportedly teaming up with Hillary Clinton for a “voting rights” fundraiser that will also feature former Obama attorney general Eric Holder. The December 7 virtual event will feature a conversation among the Hollywood stars, Clinton, and Holder, with a focus on “the fight to end gerrymandering and defend voting rights across the country,” according to a report from The Hill.

Democrats love gerrymandering when they get to draw the lines.

RINO turncoat Adam Kinzinger found that out the hard way when Illinois Democrats made his district disappear, effectively ending his career in Congress.

Republicans and Democrats can probably find unity on Kinzinger leaving Congress being good.

The only reason Democrats are making gerrymandering an issue right now is that Republicans control more state legislatures and thus have greater control over the Congressional District remapping that occurs after each census.

In reality, Democrat claims about “voting rights” are an entirely manufactured excuse to get rid of voter ID laws and federalize elections to give the Democrat Party a permanent advantage.

Even The Washington Post admitted that an overwhelming majority of Americans—including a majority of black voters—are in favor of voter ID laws.

Democrats claim people, particularly minorities, are so destitute that they cannot secure state IDs to vote.

It’s an absurd contention, but Democrats seem determined to die on that hill.

And they think Clinton, Ben Affleck, and Barack Obama flunky Eric Holder will get it done.

This comes despite Democrats’ push to turn voting rights into a wedge issue backfired spectacularly earlier this year when black business owners in Georgia slammed Stacey Abrams and the Democrats for hectoring Major League Baseball into moving the All-Star Game from Atlanta to Denver, Colorado after Georgia passed a voter ID law.

Nonetheless, Democrats are set to plow ahead with their sham voting rights campaign heading into the 2022 midterm elections.