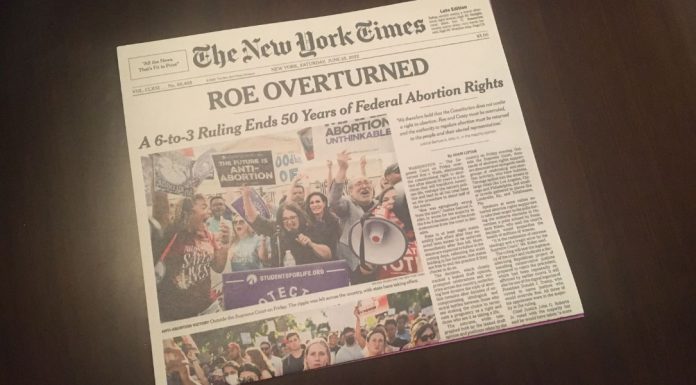 Democrats are desperate for a winning message going into the Midterms.

And they think they might have found one after a one-off victory.

But Democrats aren’t telling the truth about one vote after the Supreme Court’s landmark ruling.

Polls show that Democrats are on pace to lose big in the 2022 Midterms.

They are hoping to reverse their fortune by making abortion a wedge issue in light of the Supreme Court’s ruling in the Dobbs decision.

They see it as a path forward driving higher Democrat turnout after the decision which overturned Roe v. Wade and returned the abortion question back to the individual states.

That notion was seemingly reinforced by Democrats’ defeat of a Kansas ballot amendment to change the state Constitution on abortion.

As expected, Democrats were overjoyed with the result and have begun banging the abortion drum even harder going into the Midterms.

But Democrats might be reading too much into the vote.

First, the language of the ballot amendment was very confusing.

It read, “Because Kansans value both women and children, the Constitution of the state of Kansas does not require government funding of abortion and does not create or secure a right to abortion. To the extent permitted by the Constitution of the United States, the people, through their elected state representatives and state senators, may pass laws regarding abortion, including, but not limited to, laws that account for circumstances of pregnancy resulting from rape or incest, or [circumstances] of necessity to save the life of the mother.”

What kind of question is this? I have no idea what it means and I am a lawyer. How are normies supposed to understand this? pic.twitter.com/owL4jrY8rE

That certainly was not very clear as to what people were voting for.

When people are confused about ballot language, they tend to vote “no.”

In this case, a “no” vote meant that the state legislature could not pass laws that protect the unborn prior to 22 weeks based on a 2019 State Supreme Court ruling.

That ruling maintains that the Kansas Bill of Rights provides a right to abortion prior to 22 weeks.

As a result of the likely dubious legal precedent, the Kansas legislature moved forward with a ballot amendment likely in hopes it would preempt any future legal challenges.

The process is known as a Legislatively Referred Constitutional Amendment (LRCA).

Such moves are rarely a prescription for Conservative victory.

For example a LRCA in Virginia in 2016 that would have enshrined existing Right to Work protections in the state constitution failed due to confusing ballot language.

Fortunately, in that case state law still maintained that workers cannot be fired because they don’t want to fork over dollars to union bosses.

The majority of Americans are against unfettered abortion and forced union membership, but Democrats have built-in advantages when it comes to ballot fights.

In addition to the confusing language, Democrats’ big-money advantage gives them an edge when it comes to ad spending, organizing, and mobilization mailings.

That’s one of the reasons why public-sector unions are so corrupt.

Conversely, Republican donors can be dissuaded from contributing to causes due to left-wing intimidation tactics.

For example, in 2008, people who gave money to Prop 8 — a California ban on same sex marriage — were harassed and some were fired from their jobs.

Ballot initiatives and LRCAs tend to favor the Democrats’ big political machines that often also get to control what elections they’ll appear on the ballot during.

The Kansas decision showed that the abortion issue should be local, not federal.

Kansans did not vote for the extreme position of government-funded abortions up until the point of birth like Democrats would have everyone believe.

The best they can claim is that Kansas voted to maintain the status quo – which still protects unborn babies against late-term abortion.

Democrats should also be leery of reading too much into the Kansas decision in terms of abortion driving turnout. There was far more turnout for the Republican primaries than the Democrat primaries.