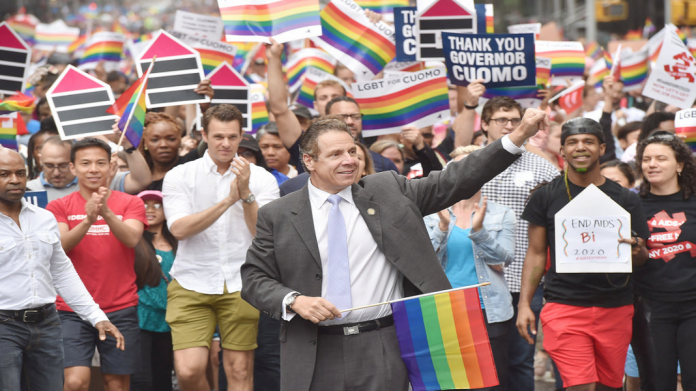 The Democrat Governor of New York, Andrew Cuomo, is still under fire for signing a pro-abortion bill into law making aborting babies legal right up until birth.

Now he’s back at it again signing another outrageous bill he thought no one would notice.

And you’ll be floored when you see what the new law entails.

After signing a pro-abortion bill that made aborting babies legal right up until birth, the Democrat Governor of New York, Andrew Cuomo, signed yet another so-called “progressive” law.

Cuomo signed the “Gender Expression Non-Discrimination Act” which adds “gender identity and expression” to the list of legal protections like religion, race, sex, and age.

Now, New Yorkers could be charged with a hate crime, a felony in New York, for simply calling someone by the “wrong” pronouns.

Just days after enshrining in New York law the “right” for mothers to have their unborn children murdered, and in some cases, even up until birth, Gov. Andrew Cuomo has now signed two new bills into law: The Gender Expression Non-Discrimination Act (GENDA) adds “gender identity and expression” to existing prohibitions against discrimination in housing and employment, and likewise makes violent crimes or threats against a person on the basis of their “gender identity” a hate crime.

Cuomo told those gathered at the LGBT Community Center in Manhattan that the legislation he has signed in recent days puts forward a “different set of social values than what we see in Washington.”

“They say in Washington, ‘We’re going to appoint Supreme Court justices who can roll back Roe v. Wade, because we want to take us back 47 years ago …’ We say, ‘No. No. You want to take us back, we’re going forward. We’re going to pass a woman’s right to choose and put it into the law,’” he declared. “And I want a constitutional amendment so that no legislature or governor can change it.”

“The Supreme Court says, ‘You can discriminate against transgenders in the military.’ That’s what they said last week. We say today, ‘No, you can’t. You cannot discriminate against people by gender identity, period,’” Cuomo stated, again being met with enthusiastic applause.

The new New York law wagers serious consequences for institutions of all kinds.

For example, an all-women’s school can’t deny admission to a biological male who “identifies” as a female.

Transgenders can even be considered for elementary school sports coaching positions.

Free speech advocates have been warning Americans about the attacks from the LGBT cultural marxists.

One of those advocates is Dr. Jordan Peterson, the professor of psychology at the University of Toronto.

He lamented as Canada accepted a law that forced Canadians to refer to other people with their “preferred pronouns.”

And he has been warning Americans that if they are not careful, they could find themselves in the very same boat.

But many brushed that off as the crazy “progressive” Californians doing what they do.

Now that the bill has passed New York as well, the nightmare of seeing the law pass all across America is a stark reality.

Should you be forced to call someone by their “preferred” pronouns? Sound off in the comments below.