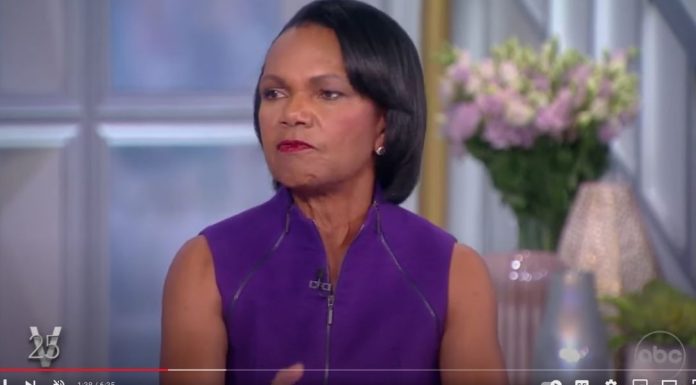 The radical Left has infected the mainstream.

And decent people are disgusted after the mind-numbing thing an unhinged leftist just said about Condoleezza Rice.

Nothing infuriates the Left more than members of “oppressed” groups who do not think of themselves as oppressed.

So black Conservatives, female Republicans, and gay free-market Capitalists all get attacked with fury by the Left.

Former Secretary of State Condoleezza Rice proved that point when she recently appeared on The View and took a blowtorch to the neo-Marxist doctrine of Critical Race Theory.

Her appearance triggered leftists who are all-in on the “America is irredeemably racist and evil” bandwagon.

One of those leftists is a former MSNBC host named Touré, who unleashed a jaw-dropping screed against Rice, calling her a “foot soldier for white supremacy.”

Touré wrote in the far-left site The Grio:

“Condoleezza Rice’s recent appearance on The View was offensive and disgusting for many reasons, but she was who we thought she was: a soldier for white supremacy…Her primary argument against Critical Race Theory is that history should not be taught in a way that makes white kids feel bad. What? We should whitewash U.S. history to protect the feelings of white children? …Also this — white children and adults should absolutely feel bad about the past atrocities committed by white Americans. They should feel guilty. They should cringe at what their ancestors did. They should also understand that modern white power is directly related to those atrocities.”

This is immoral claptrap.

Collective guilt is the pathway to hell.

It creates a never-ending cascade of punishment that can never be rectified.

But CRT doesn’t do that. Instead, CRT looks at any disparities between groups and chalks them up to unjust discrimination.

Many black parents across the country are objecting to it because it tells black kids they are second-class citizens, and that they have no chance of succeeding in America.

It’s a disgusting doctrine, and mainstream elites keep trotting out their propagandists like Touré to spread it.

Ironically, Touré grew up the privileged son of an accountant who worked for a former Boston mayor – on the other hand Rice grew up in the South, when everything was still Democrat-controlled with Jim Crow laws put in place by actual white supremacists who were all of course Democrats.