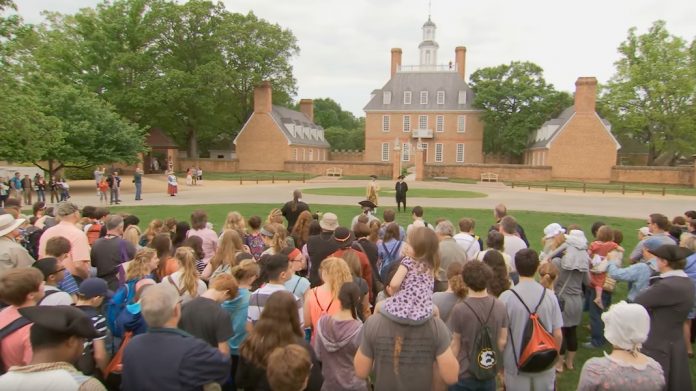 The woke mob has been keeping more and more on our society with their radical agenda.

And now they are coming to rewrite the history of our nation’s founding.

Colonial Williamsburg has joined the woke mob and will now teach the “queer history” of our founding fathers you’ve never heard before.

First the woke mob came to tear down symbols of our history.

They started with tearing down statues of Stonewall Jackson and Robert E. Lee claiming their presence inspired racism.

OVERNIGHT: The statue of Confederate General Robert E. Lee has been removed from the U.S. Capitol – that announcement from the Governor of Virginia. pic.twitter.com/uekm1887IS

But when our society allowed that to happen, then the crazed leftists tore down statues of our founding fathers like George Washington and Thomas Jefferson.

"June 14 2020 -Students at Jefferson High School in Portland tore down the Thomas Jefferson statue in front of their school. Thomas Jefferson wrote “All men are created equal“ in the US declaration of Independence, but he was a life-long slave owner who enslaved over 600 people pic.twitter.com/qKHhqfItKv

And now we are watching in real time as the Left tries to change the whole history of Western Civilization that is being taught in schools through Critical Race Theory.

Now the woke mob has just revealed their latest nail in the coffin for our nation.

Colonial Williamsburg is their latest target as the leftist radicals introduce a course to teach “queer history” of our nation’s founding.

In an attempt to paint our history as flowing with non-heterosexual males, researchers have uncovered a few stories about queers in early American history.

Out Magazine claims that “[i]t turns out we were always here and queer, we were just kept out of the history books.”

Just give it a few years before and they will try to claim that James Madison was actually a non-bianary transgender woman.

After all, James Callender, a scandalmonger and ardent supporter of Thomas Jefferson wrote before the election of 1800 that John Adams had a “hideous hermaphroditical character, which has neither the force of a man, nor the gentleness and sensibility of a woman.”