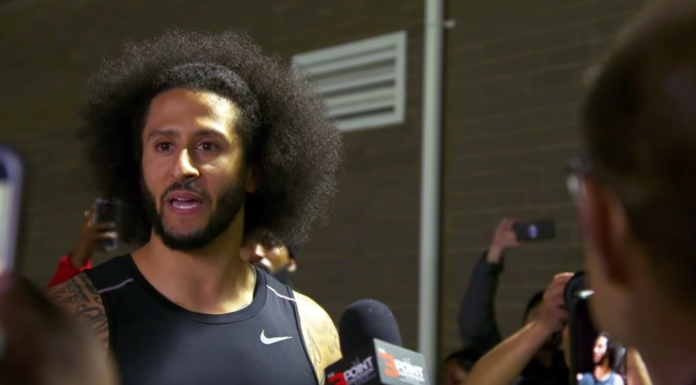 The Left tried to turn washed-up quarterback Colin Kaepernick into a folk hero after his anti-American anthem protests.

He was given various awards, a book contract, and a lucrative shoe deal with Nike.

But Kaepernick’s new Nike sneakers will make you sick to your stomach.

Colin Kaepernick says he wants to get back to playing in the NFL, but all of his actions say otherwise.

He’s antagonized the league at every turn.

He sued the NFL over a ridiculous collusion charge, and he’s antagonized at least two franchises that were receptive to signing him.

Kaepernick also torpedoed a workout that was set up for him to engage with several teams.

Now Kaepernick is again proving why he’s the ultimate distraction that no team wants to deal with.

Nike is preparing to release yet another product lionizing Colin Kaepernick, this time, with a shoe memorializing the first time Kaepernick protested during the national anthem in 2016.

The sportswear giant is set to issue the Colin Kaepernick x Nike Air Force 1, a low sneaker that features the date of the first time Kaepernick remained seated during the national anthem to protest against the country.

August 8, 2016, was the very first time Kaepernick turned the playing of the national anthem into an opportunity to tell the world that all police are racists, and he thinks the United States is a bad place for minorities. On that date ahead of a preseason game against the Houston Texans, the San Francisco 49ers second-string quarterback refused to stand at attention when the national anthem began.

The anti-American protests were a huge problem for the NFL.

Many season ticket holders canceled their plans and some franchises even issued apologies to bring back fans into the fold.

Kaepernick’s newest shoe undermines all of that and guarantees he will never take another snap in the NFL.

He’s proven time and time again he can’t help but be a distraction and a lightning rod for controversy.

Do you think Kaepernick prefers to be a martyr than an NFL quarterback?