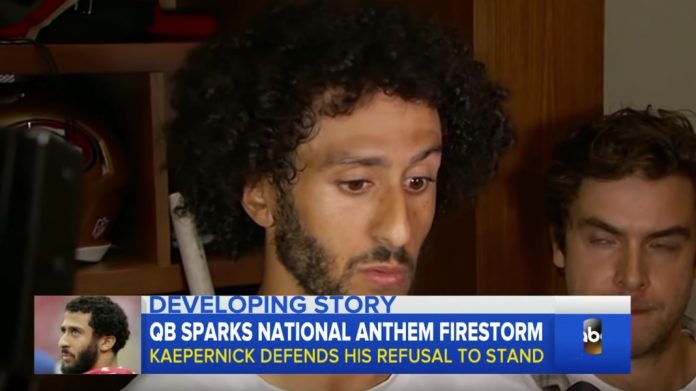 Stick a fork in him.

And Kaepernick’s career was ended by the last person he ever expected.

Former NFL quarterback Colin Kaepernick became a media darling when he sat (and eventually knelt) for the playing of “The Star-Spangled Banner.”

His anti-American protests predictably made him a beloved figure on the Left, but his media antics and dwindling effectiveness as a quarterback made him poison for an NFL franchise.

Despite a long and bitter feud with the NFL, Kaepernick was given the opportunity to work out for all 32 NFL teams, but at the last minute, he turned it into a media circus.

ESPN personality Stephen A. Smith, who’d been supportive of Kaepernick in the past, called out Kaepernick for the unbelievable thing he did.

You see? He don’t wanna play. He wants to be a martyr. But, guess what? It ain’t working this time.

All of us believe Colin Kaepernick would have sold out. And if he had sold out, I believe he would have had a job in two weeks. But it didn’t happen because he didn’t show. He wanted to show up to a high school in Georgia, not an NFL facility, a high school. And you took it live. Like, the average Joe out there gets to decide if he’s on the NFL roster. You don’t want to work, you just want to make noise and control the narrative.

Smith is known for being bombastic, but he’s spot on with his analysis of Kaepernick.

Kaepernick is doing everything in his power to repel NFL teams with his behavior, including suing the league.

Smith also once appeared on Fox News and said that every black person in America should vote Republican at least once in their life so the Democrats don’t take their vote for granted, so perhaps we shouldn’t be too surprised that he was willing to tell the truth about Kaepernick.

Does Kaepernick want to play again, or does he just want to be a martyr?