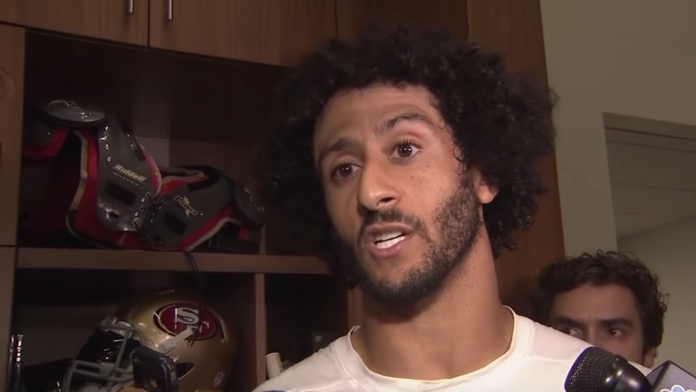 Colin Kaepernick has become a symbol of anti-American hatred.

The former NFL quarterback continues to be praised by Leftists for ripping the country whenever he can.

Colin Kaepernick has sunk into a deep abyss of far-Left radicalism ever since his NFL career fell off a cliff.

Kaepernick spent the first few years of his career kissing his bicep after scoring touchdowns, but was humbled in year four when he was benched for his horrendous play.

In his fifth and final season in the league, Kaepernick sparked controversy by igniting the anti-American national anthem protests.

Since then, it’s been a race to the far Left.

In Kaepernick’s latest stunt, he took to Twitter on Thanksgiving to promote an “Unthanksgiving” event, which protested America’s earliest settlers and capitalism.

Spent the morning at the Indigenous People’s Sunrise Ceremony on the 50 year anniversary of the Occupation of Alcatraz. The US government has stolen over 1.5 billion acres of land from Indigenous people. Thank you to my Indigenous family, I’m with you today and always.✊???? pic.twitter.com/6cTuktUlQN

Kaepernick has adopted the far-Left view of American history taught in the writings of Howard Zinn and other anti-American communists.

In this cartoonish view of history, the “winners” are all guilty of oppressing the “losers.”

This ignores the fact that there was tribal conflict among Native Americans long before any Europeans ever set foot on the continent.

History is filled with alliances and conquest and everything in between.

Kaepernick’s Unthanksgiving event talks about how land was stolen and should be returned to Indigenous people, but of course he can’t say which tribe.

Some tribes were conquered by others, so using a Leftist lens, it’s impossible to say who is the most aggrieved, and it would be insulting to suggest that all tribes are one in the same.

There’s also the inconvenient fact that Native Americans enslaved other Native Americans as well as Africans, so the childish view of history that puts everyone either into the sinner or saint category quickly falls apart.

The truth is Kaepernick’s tweet, and all of his activism, is aimed toward tearing down America and riling up the masses to revolt against capitalism.

This is a socialist ploy, decades in the making, and Kaepernick is an effective useful idiot.

Do you think it’s ungrateful for a multi-millionaire celebrity athlete to constantly rail against America?