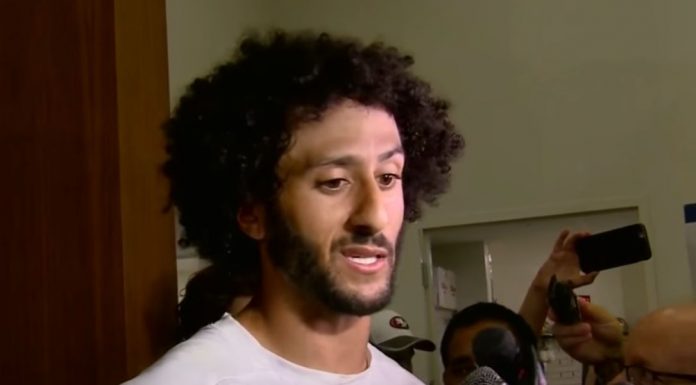 Leftists and brainwashed lemmings are following his lead in disrespecting the country.

Now Kaepernick just signed a deal with Netflix that will make you sick.

It’s been almost four years since Colin Kaepernick first disrespected America by refusing to stand for the national anthem.

Since then, he’s signed an endorsement deal with Nike, inked a book deal with Random House, received humanitarian awards, and garnered all sorts of glowing press.

Even after he insulted the NFL and sued them for colluding against him, the NFL paid him a settlement and set up a personal workout showcase for him.

Kaepernick sabotaged the workout himself by moving to a different location at the last minute.

Despite all of the attention Kaepernick has received, he still considers himself a victim.

During his final season in the NFL after he had been radicalized to the far Left, Kaepernick had the audacity to say during an interview that he faced oppression growing up.

Kaepernick was adopted by a white family and grew up in an upper middle class suburb in Northern California.

He was recruited by Dartmouth to play baseball before eventually attending the University of Nevada on a football scholarship.

This isn’t exactly a story of oppression.

However, Kaepernick’s life story will be coming to Netflix in scripted form courtesy of far-left activist filmmaker Ava DuVernary.

DuVernary recently completed the revisionist history of the Central Park Five in When They See Us, so she’s sure to do the same for Kaepernick.

Kaepernick’s story is a familiar one.

He grew up in a well-to-do family, then became indoctrinated to the Left.

The only difference is he didn’t get radicalized as an undergraduate student at Berkeley, he got radicalized while taking summer classes there during the off-season.

It’s both interesting and infuriating that oftentimes the most financially well-off are the ones most eager to destroy America in the name of “justice.”

Socialists of the 19th and 20th century were exasperated by the fact that the American working class wasn’t on board with their radical program because life was pretty good.

Despite its supposed concern for the poor and downtrodden, socialism has always been a philosophy for the elite.

While Kaepernick gets showered with praise for preaching about how America is terrible, the dispossessed in America will only suffer more.

Will Netflix try to turn Kaepernick into a folk hero with a misleading series?