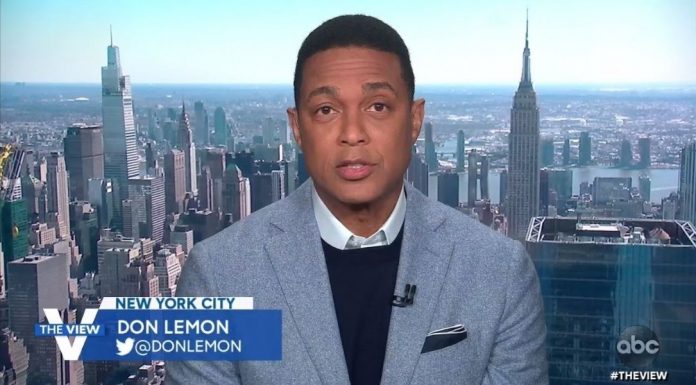 CNN doesn’t even try to hide the left-wing extremism of their hosts anymore.

The liberal rhetoric spewed on the channel is blatant and becoming more and more radical.

And CNN’s Don Lemon seems to be reading a very different Bible from the rest of the world.

Recently, the Vatican made an announcement in which they noted that they do not have the power to bless same-sex marriages.

The statement gave many Catholics, who have been doubting the current Pope, hope, but it sent the Left into a tailspin.

Don Lemon, a host on CNN and gay man, was a guest on ABC’s The View, where Megan McCain asked him to share his feelings on the recent statement by the Vatican.

“You got engaged to your fiancé, Tim, in 2019, and this morning, we learned that the Vatican has said that the Catholic Church won’t bless same-sex unions since ‘God cannot bless sin,’” McCain said.

Lemon explained that he isn’t against people believing in God, but he has a problem with those whose beliefs hurt another person or takes away that person’s freedoms because “God is not about hindering people or even judging people.”

“I think that that’s wrong, and I think that the Catholic Church and many other churches really need to re-examine themselves and their teachings because that is not what God is about,” Lemon argued.

According to Lemon, Jesus said, “if you believe in Jesus, and that is to love your fellow man and judge not lest ye be not judged.”

Lemon continued on by calling people of faith to “go out and have a barbecue and meet people and start breaking bread with people and getting to know them . . .”

This is a classic case of taking scripture out of context and using only what suits your argument.

Lemon is no stranger to quoting scripture out of context and bending the Word of God to support his views.

In the end, all will be judged.

Lemon might want to take a glance at Romans 6:23 that says, “For the wages of sin is death, but the gift of God is eternal life in Christ Jesus our Lord.”

Yes, Christians are called to love all and to judge the sin, not the sinner, but the Bible very clearly states that homosexuality is a sin – see 1 Corinthians 6:9 and 1 Timothy 1:10.

Along with all his fellow liberals, Don Lemon continues to twist and turn the truth to fit their narrative, and the Bible is no exception.