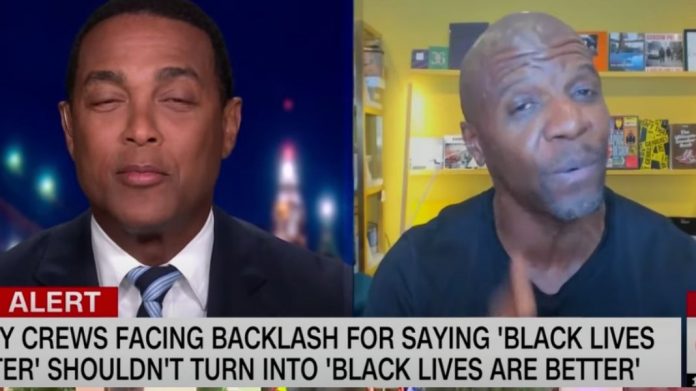 CNN has been a driving force behind the Black Lives Matter movement and using their platform to push a radically left-wing and anti-police agenda.

But they never expected African-American actor Terry Crews to stand up to them in this controversial interview.

Now CNN is trying to sabotage Terry Crews’ acting career after this interview where he destroyed the Black Lives Matter narrative and caused host Don Lemon to have a breakdown on live TV.

In the wake of George Floyd’s death and the explosion of riots and protests, Terry Crews decided to stand up to the Black Lives Matter movement.

Crews told Lemon, “When you have the leaders of the Black Lives movement, who are now talking about, ‘If we don’t get our demands, we’re going to burn it down,’ other Black people who are talking about working with other whites and other races, they’re being viewed as sell-outs, or called ‘Uncle Toms’ . . . It was almost a supremacist move where they viewed that their Black lives mattered a lot more than mine.”

Don Lemon proceeded to blast Terry Crews over his statement and even insinuated that Crews would have opposed Martin Luther King.

Fortunately, Terry Crews managed to maintain his calm attitude and conveyed his concerns about the leaders of the Black Lives Matter movement that are leading people astray.

He also proceeded to mention the violence within black communities that Black Lives Matter has completely failed to address.

Don Lemon refused to acknowledge any of his points and asked loaded questions to try throwing him under the bus.

Now, the actor is under attack for simply promoting equality and asking valid questions about the self-proclaimed Marxist goals of the Black Lives Matter movement.

Not only is he under fire from CNN and the Fake News Media, but his fans on social media and online activists are harassing him.

Terry Crews could soon find himself in trouble with Hollywood for challenging their leftist agenda.

Culture Watch News will keep you up-to-date on any development to this ongoing story.