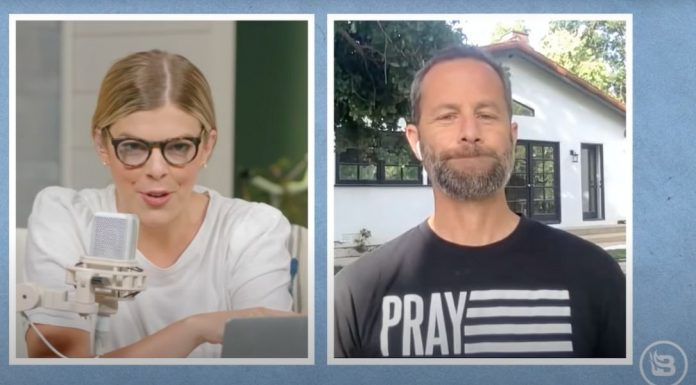 Hollywood is utterly controlled by the Left.

But films that do not subscribe to the Left’s narrative can still punch through.

And one Christian actor made a move that just challenged the Left head-on.

Actor Kirk Cameron is an oddity in Hollywood because he’s an unabashed Christian who lives out his faith.

And his newest movie Lifemark touches on the abortion issue from a pro-life perspective.

Abortion has again become a big topic after the Supreme Court’s landmark ruling in the Dobbs decision, which returned the abortion question back to the states.

Lifemark shows that adoption is a choice that does not get talked about enough in the abortion debate.

The synopsis for the movie reads:

“David’s comfortable world is turned upside down when his birth mother unexpectedly reaches out to him, longing to meet the 18-year-old son she’s only held once. With the encouragement of his adoptive parents, David embarks on a journey of discovery that leads to a staggering truth from his past.”

During an interview, Cameron said, “We had no idea that the timing of the release of this film, which was delayed by COVID, would be so unbelievable with the overturning of Roe v. Wade…People talk about pro-life, pro-choice, but they forget about the adoption option.”

In fact, Democrats have ghoulishly mocked Republicans who have offered to adopt the babies of women contemplating abortion.

In the view of the Left, choosing death is a better option than choosing adoption because of the political ramifications.

That’s why Senator Elizabeth Warren (D-MA) and other Democrats have called for the closure of crisis pregnancy centers.

Meanwhile, the media has said little about dozens of these clinics being firebombed around the country.

Cameron continued, “It seems that we’re divided almost by design over everything imaginable… From politics to race to gender to vaccination status, and most recently over this issue of life and abortion…We need a way to look at this issue through the lens of love — love for the birth mom, love for the unborn baby, love for the adoptive parents who are longing to have a baby… And ‘Lifemark’ shows a compassionate, beautiful solution to a very difficult problem in our culture today.”

Over the past couple of decades, the pro-abortion movement has become so militant that it now views abortion as an unfettered good instead of a tragedy.

Cameron added, “[W]hen a woman chooses adoption she has no idea what’s going to happen. But what can happen is the answers to the prayers of that couple who couldn’t have kids. And this amazing life of this young man.”

As medical technology improves and viability becomes earlier in pregnancy, the rationale for abortion on demand up to the point of birth looks even more extreme.

Only 19% of Americans are in favor of third-trimester abortion, and that number decreases the closer a women gets to birth.

Cameron’s film is important in that it reminds people there are always better options than death.