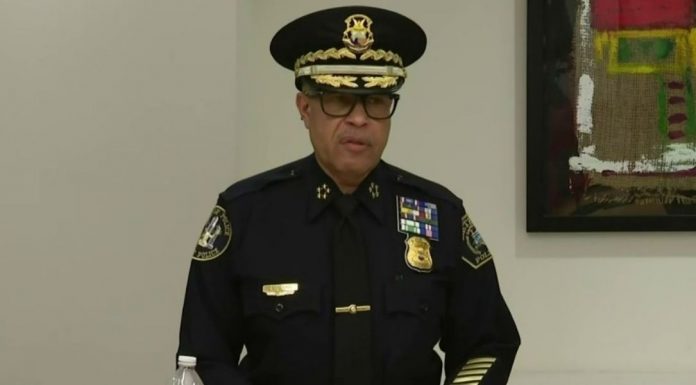 The radical Left continues to call for the defunding of the police.

The “Squad’s” group of six Democrat members of the House have been the most vocal about their desire to do away with law enforcement.

Well, the Chief of the Detroit police has a message for one “Squad” member, Rashida Tlaib, and it’s not a nice one.

Daunte Wright was a 20-year-old black man accidentally killed during a traffic stop.

In the wake of the tragedy, Tlaib climbed atop her soapbox and began to call for “no more policing.”

Not surprisingly, a member of the communist Left would be using a tragedy to push their agenda – it seems that’s part of the Democrat playbook.

Tlaib immediately faced backlash after she called to end “policing, incarceration, and militarization.”

Chief Craig told Fox 2 Detroit in an interview, “I’d love to see her resign. I’d throw her a goodbye party.”

Craig continued on, “Who is she speaking for? When you talk about abolishing police, incarceration, when you talk about safe cities – what do you think the residents in Detroit want? I know. I speak with them.”

“It wasn’t an accident. Policing in our country is inherently [and] intentionally racist. Daunte Wright was met with aggression [and] violence. I am done with those who condone government funded murder. No more policing, incarceration, and militarization. It can’t be reformed.”

Many in Tlaib’s own party are distancing themselves from her outrageous rhetoric.

He went on to condemn Congresswoman Maxine Waters, Democrat from California, in the interview after she told protesters in Brooklyn Center, Minnesota, to “get more confrontational” if Derek Chauvin was acquitted of murdering George Floyd.

“I will not let someone like a Tlaib or a Maxine Waters paint our profession with a broad brush. Are you aware of what other U.S. rep said as recent as yesterday? You know what she said in response to Brooklyn Center? … Get more confrontational,” Craig stated.

According to sources, Maxine Waters requested a police escort while marching with the protesters in Brooklyn Center.

And, a recent Federal Election Commission data shows that the “Squad” members spent close to $32,000 on private security as they called for cities to “defund” the police.

The hypocrisy of the Left is outrageous.

The radical Left is out of touch with the American people and speaks only for a fringe group.

However, though they are the minority, they are a very vocal minority.

And if Americans continue to sit idly by, there is no telling how much more harm they will cause.