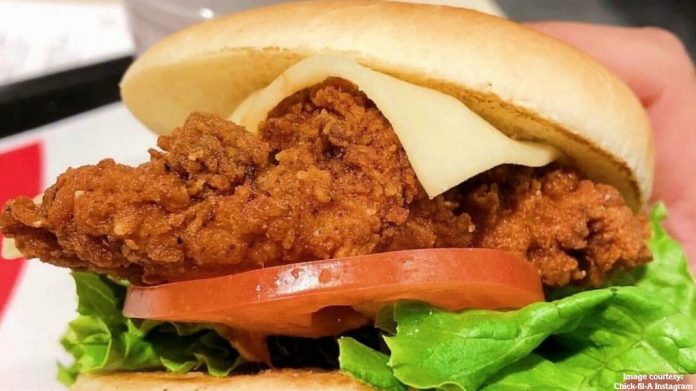 Chick-fil-A is notorious for breaking all the rules.

They don’t let “politically correct” culture get in the way of promoting conservative Christian values.

And what the tasty fast food chicken chain is about to do next will leave you floored.

Despite being closed on Sundays, Chick-fil-A has quickly become the fastest-growing fast food joint in America.

And it’s about to notch another medal under its belt.

Chick-fil-A is set to become the third-largest restaurant in America, just behind McDonald’s and Starbucks.

Chick-fil-A, the Christian-owned company that’s often targeted by the Left, will soon become the third-largest restaurant chain in the United States.

CNBC reported May 8 that the chain is on pace to become the third-largest restaurant in sales this year, passing Subway and trailing only McDonald’s and Starbucks.

“Chick-fil-A stands out largely because it has avoided any major menu renovations, unlike competitors McDonald’s and Burger King [by] sticking to a relatively simple menu,” CNBC’s Sara Eisen reported.

The company, she added, has instead focused “on its signature chicken sandwiches.”

Chick-fil-A will reach No. 3 “despite all the controversy and despite the fact that it’s closed on Sundays,” she said.

Since its inception in 1946, Chick-fil-A has been closed on Sundays to honor the Lord’s Sabbath.

And because they are unabashedly Christian, leftists have been trying everything to make the chicken chain fail.

In fact, in 2012, LGBT activists launched a “boycott” of Chick-fil-A urging everyone to stop eating their delicious golden chicken sandwiches and crispy waffle fries.

But their plan backfired and only drove millions of Americans to the restaurant’s doors.

Since then, radical leftists have been conspiring against Chick-fil-A in whatever way they can, including refusing to bring the restaurant on college campuses because of their Christian values.

The truth is, the more the Left tries to conspire against Chick-fil-A, the better Chick-fil-A does.

Do you think Chick-fil-A has a right to practice Christian values? Let us know what you think in the comments below.