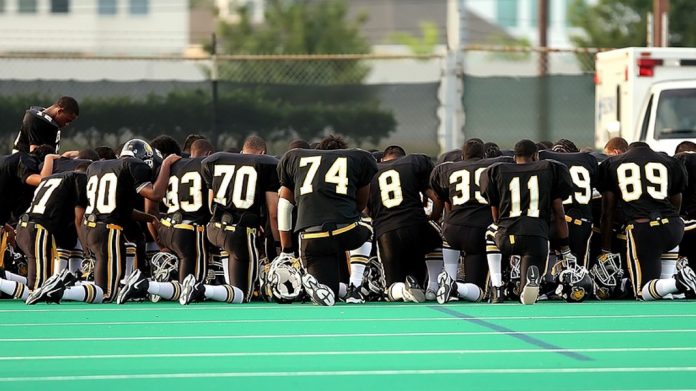 One moment can send anyone’s life sideways in an instant.

The bigger you are, the further you can fall.

And a retired NFL star just found out after a caught-on-camera crime ruined his future.

The NFL season is already off to a rocky start.

Now an NFL broadcaster and former star player has been forced to step down after one shocking crime.

Former Pro Bowl cornerback and Super Bowl champion Aqib Talib transitioned into broadcasting after retiring from the league in 2020.

Talib called games for Fox Sports as a color commentator, and parlayed that into a gig for Amazon’s Thursday Night Football coverage.

Talib was set to give commentary during pregame, halftime, and postgame for Amazon.

However, Talib is resigning from his role after being involved in a deadly shooting at a youth football game in Texas.

NFL reporter Ian Rapaport explained on Twitter, “Just spoke to Aqib Talib. In light of the recent tragedy, he is going to step aside from his broadcasting duties at Amazon to spend time with his family.”

According to witnesses at the scene, Talib instigated a fight with opposing coaches at a football game featuring nine-year-olds.

As tensions rose, Talib’s older brother Yaqub reportedly pulled out a gun and fatally shot opposing coach Mike Hickmon, whose son was one of the players in the game.

Today at a little league football game a head coach was shot and killed his son is the QB on the team witnessed 🤬 pic.twitter.com/hMTGiK0PDl

The Blaze reported that “three eyewitnesses claim that five-time NFL Pro Bowler Aqib Talib instigated the Pee Wee football brawl that led to the on-field shooting death of coach Mike Hickmon in Texas…[N]ear the conclusion of a 9-and-under football scrimmage in Lancaster, Hickmon scuffled with opposing coaches representing the North Dallas United Bobcats, a team organized and financed by Talib and his older brother Yaqub Talib. During the melee, witnesses say Hickmon struck Aqib Talib with a yard marker. The fracas ended when a man wearing a black hoodie fired five shots at Hickmon, killing the 43-year-old assistant coach. Lancaster police identified Yaqub Talib as the shooter. Yaqub turned himself in to law enforcement Monday afternoon. Coaches for the Dragon Elite Academy, the team Hickmon served as an assistant coach, blame Aqib Talib for sparking the tragedy.”

Coach says Aqib incited it all

Dragon Elite coach Kerry Lewis said, “Aqib incited the whole uproar. The game would’ve never been stopped had Aqib not come over to our sideline to yell at the refs.”

Talib accused the refs of playing favorites after an unnecessary roughness penalty on his team, but Talib is the one who organized the event and paid the referees.

He’s also a former NFL star, so it’s difficult to argue that the refs were in the bag for the opposing team.