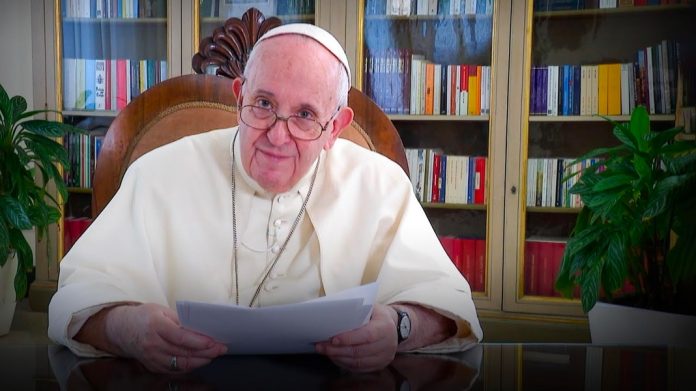 Globalist elites are trying to create a worldwide monoculture.

Everything must align with the secular Left’s values.

But Catholics are shocked the Pope actually blasted world leaders for once.

The Christmas season is here, which means that atheistic leftists are doing everything they can to play the role of Grinch.

Members of the European Union issued an absurd list of guidelines meant to secularize Christmas.

From The Daily Wire:

In a recently leaked guidance titled “Union of Equality,” European Union leaders advised members to “avoid assuming that everyone is Christian” during the Christmas season. To that end, the 30-page document, released by the EU equality commissioner, Helena Dalli, in late October, advised staff, “Not everyone celebrates the Christian holidays, and not all Christians celebrate them on the same dates.” Instead of saying, “Christmas time,” it instead recommended saying, “Holiday times.”

The guidelines also said members should try to avoid using names like “Maria and John” that originate in Christianity, and instead incorporate multicultural options like “Malika and Julio.”

Western leftists have become so obsessively “woke” that Christmas is now offensive.

Pope Francis, who’s a leftist on nearly every issue, actually blasted the EU in the harshest of terms for their ridiculous guidelines.

The Pope wrote that the EU’s Christmas guidance was an “anachronism” and added:

“In history many, many dictatorships have tried to do so. Think of Napoleon: from there…Think of the Nazi dictatorship, the communist one…it is a fashion of a watered-down secularism, distilled water…But this is something that throughout hasn’t worked.”

It’s surprising to see Pope Francis criticize globalist entities, but he recognized that the EU went too far with its ridiculous Christmas decree.

“The European Union must respect each country as it is structured within, the variety of countries, and not want to make them uniform. I don’t think it will do that, it wasn’t its intention, but be careful, because sometimes they come, and they throw projects like this one out there and they don’t know what to do; I don’t know what comes to mind…[B]e careful not to be vehicles of ideological colonisation.”

The Left’s attempt to stamp out religion is causing a malaise across the West.

When Conservatives talk about the War on Christmas, this is precisely what they’re talking about.

Expect the Left to ramp up its attacks on Christmas in the coming weeks.