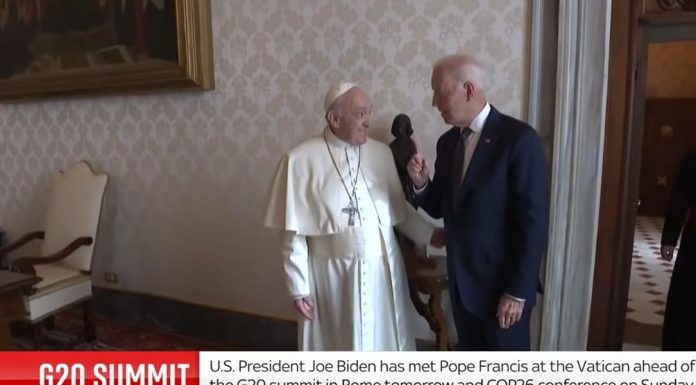 This week Catholic Bishops go where even the Pope hasn’t dared.

It’s a bold move the majority of Catholics support.

And it could serve as a serious wake up call for Joe Biden and Nancy Pelosi.

A whole lot of US Bishops are done messing around—and this week they’ll vote on guidelines that would prohibit Catholics who are pro-abortion from taking Communion.

This move comes on the heels of Biden’s visit to the Vatican last month when Biden came away saying Pope Francis told him he was welcome to continue taking Communion.

Biden said they did not discuss abortion.

According to a recent National Review article, “Pope Francis had previously said that bishops should use ‘compassion and tenderness’ with Catholic politicians who support abortion rights.”

But many conservative Catholics believe politicians need to be held accountable.

During a June meeting of the US Conference of Catholic Bishops (USCCB), San Francisco archbishop Salvatore Cordileone questioned how bishops can “expect to be taken seriously” without acting “courageously, clearly and convincingly on this core Catholic value,” according to the Washington Post.

While some in the Church argue that refusing Communion to pro-abortion politicians will politicize church services, most Catholics actually support the move.

A CatholicVote poll conducted this summer showed that 74% of Catholics who regularly attend Mass believe Joe Biden, Nancy Pelosi, and other officials who support abortion should not receive Communion.

That poll likely encouraged the bishops to take action against prominent leftist Catholics.

“Catholic politicians who advocate for policies considered ‘gravely immoral’ create confusion and discord among believers,” Brian Burch, president of CatholicVote said in a prepared statement. “Catholics’ concern about the flouting of Catholic social teaching by public leaders is less about politics and more about the integrity of the faith, along with reverence and respect due the Holy Eucharist. This polling data should bolster the confidence of Catholic bishops as they prepare to discuss how to recover an understanding of the beauty and richness of the sacrament—among all Catholics. The data is very clear: Bishops have an obligation to act.”

The US Bishops meeting in Baltimore this week is set to conclude today.

And with Bishops set to vote on the draft guidelines determining how those committing “mortal sin” will be identified and excluded from taking Communion, Joe Biden could be in for a big surprise next time he attends Catholic Mass.