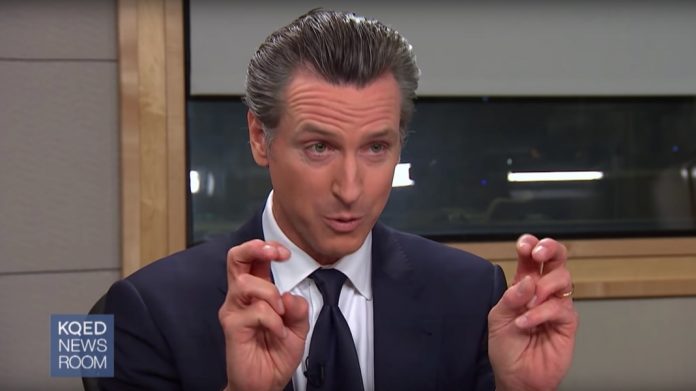 And California’s governor is furious at this country music star after what he just said.

When California Governor Gavin Newsom was in the midst of his recall election, he spent most of his time campaigning.

Considering the recall election was caused due to his intrusive coronavirus orders, he tempered down his rhetoric a bit.

He knew that going all-out with restrictions prior to the election could hurt him at the ballot box, and potentially cut his governorship short.

But as soon as that election was over, Newsom came back with a vengeance, signing the most restrictive COVID-19 restrictions in the entire country.

Newsom’s latest mandate forces students in public and private schools to become vaccinated, without any alternatives, like testing.

While many on the Left are cheering this decision, he is naturally facing backlash.

Among those firing off at Newsom is country music star Jason Aldean.

Aldean angrily responded to the news, telling Newsom that “this is not how America and being free works.”

He made this response on his Instagram page, where he has nearly four million followers.

“So let me get this straight! It is no longer our decisions as parents (or free Americans) to make decisions about our kids, Gavin Newsom makes those decisions for us now?? You gotta be kidding me!” Aldean wrote.

“People in California should be outraged and people everywhere else better start standing up and speaking out NOW. This is not how America and being free works.”

Aldean isn’t alone among celebrities speaking out against vaccine mandates.

Other major celebrities to speak out recently include rappers Nicky Minaj and Chet Hanks, and comedian Jim Breuer.

Minaj in particular has become a champion on the issue, highlighting cases of vaccines causing negative side effects.

She has been silenced on major social media platforms, and attacked by major figures on the Left that she once considered friends.

In particular, Minaj faced attacks for sharing a video clip of Fox News host Tucker Carlson speaking about her bravery on the issue.

MSNBC host Joy Reid took offense, telling Minaj that she’s “so sad that you did that.”

Minaj fired back, stating: “This is what happens when you’re so thirsty to down another black woman (by the request of the white man), that you didn’t bother to read all my tweets. ‘My God SISTER do better’ imagine getting ur dumb a– on tv a min after a tweet to spread a false narrative about a black woman.”