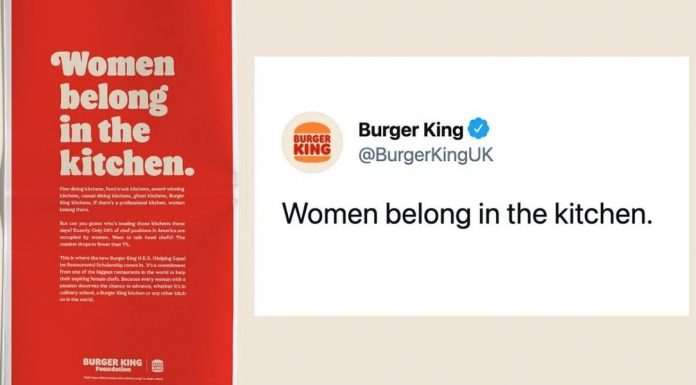 Corporations have been trying to suck up to the Left over the past few years like never before.

And Burger King is one of them that has done everything they can to get approval from the “woke” mob.

But Burger King claimed that women belong in the kitchen and the Left went absolutely insane.

Every aspect of our lives has been taken over by the woke outrage mob.

And even corporations are bending over backwards to pacify the Left.

Just look back when Black Lives Matter had its grip over the nation last summer.

And corporations like Burger King even took it a step further by showing their support for Black Lives Matter on social media.

Burger King has tried to be the King of woke on social media by tweeting out support for Black Lives Matter’s agenda.

Back in June, the fast food giant tweeted out, “we stand with you in support of equality and justice for black lives and we will use our platform, our position, and our voice to do so.

“When it comes to people’s lives, there’s only one way to have it. Without discrimination.”

But their appeasement of the Left hasn’t stopped there on social media.

Back in July, Burger King released one of the most cringeworthy videos on Twitter about stopping global warming from cow farts.

You can see the tweeted video about Burger King’s crusade against cow farts below:

cow farts & burps are no laughing matter. they release methane, contributing to climate change. that’s why we’re working to change our cows’ diet by adding lemongrass to reduce their emissions by approximately 33%. learn about our ongoing study: https://t.co/kPCXpjfbGL #CowsMenu pic.twitter.com/DnmF8gVVL0

But right when you thought it couldn’t get worse, Burger King dropped a tweet that was supposed to show solidarity with international women’s day that went horribly wrong.

Well we all could guess how that tweet went with the Left.

The Left went absolutely nuts and berated Burger King for being sexist.

And after being caught off guard by the response of this epic tweet, the Kings of woke tweeted out, “If they want to, of course. Yet only 20% of chefs are women. We’re on a mission to change the gender ratio.”

The engagement on your original tweet—which, again, is literally just a sexist trope—is 527% *higher* than the tweet announcing the scholarship program.

Way more people are seeing you validate sexism on #InternationalWomensDay than are learning about your scholarship program. pic.twitter.com/wMH2Drvomc

And now it appears that Burger King’s “Women belong in the kitchen” tweet is actually a company wide movement to give scholarships out to women to get them into kitchens across the food industry.

Only 24% of chef positions in US are occupied by women.

That’s why the BK Foundation launched a culinary scholarship program to bring more women to leadership positions in the industry.

Women belong in the kitchen if they want to work there. And hopefully in leadership roles. pic.twitter.com/ITwnTJQpDp

You can’t make this up.

No one is really sure what Burger King expected, but no matter how much you try to pacify the woke mob they will always criticize you.