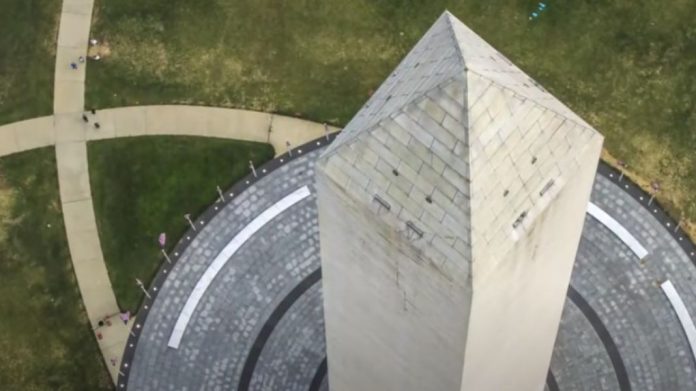 Black Lives Matter is the most powerful group in America today, for all the wrong reasons.

They believe that America is a racist country, and that white people need to pay for it.

And to do that, the group just took their first step toward destroying the Washington Monument.

Black Lives Matter isn’t just about enacting policies that adversely harm white people, like reparations and abolishing the police (which will actually harm black people the most).

They want to go back in time and tear down statues recognizing events or figures in American history they disagree with.

That involved tearing down Confederate war memorials, and statues to generals or politicians in that war.

For years, many people, including President Donald Trump warned that those calls for statue removal will eventually come for people like Thomas Jefferson and George Washington, due to the fact that they owned slaves.

In 2017, Trump questioned, “Are Washington and Jefferson statues next?”

The mainstream media laughed at the suggestion.

But like most of what he says, it has come true.

In Portland, Oregon, a statue of George Washington was ripped down and defaced with Black Lives Matter slogans, including: “Murder,” “Big Floyd,” “1619,” “F*** Cops,” “BLM,” “Land Back,” “White Fragility,” and “You’re on Native Land.”

A mob of around 20 people took it down under the cover of darkness, and then lit an American flag on fire as it sat on the ground.

The mainstream media isn’t talking about this, and doesn’t want people to know it even happened.

They also went after another statue in honor of Thomas Jefferson.

So everything Trump stated was true, yet the mainstream media who made fun of him for saying it will never apologize for it.

“There’s an interesting piece of history up here . . . Mr. Thomas is all beside himself,” one protester said of the site of the Jefferson statue.

“We’re taking this city back,” the organizer added. “One school at a time. One racist statue at a time.”

It is clear they aren’t done.

And the crown jewel will be the Washington Monument in Washington, D.C.

Perhaps they will even demand a change to the name of the city, and they could get their way with how the establishment is bowing to their demands.

Somebody needs to stand up to these thugs, but sadly so many leaders aren’t willing to do so, as they are terrified of being branded a racist.

Do you think our monuments should remain standing?