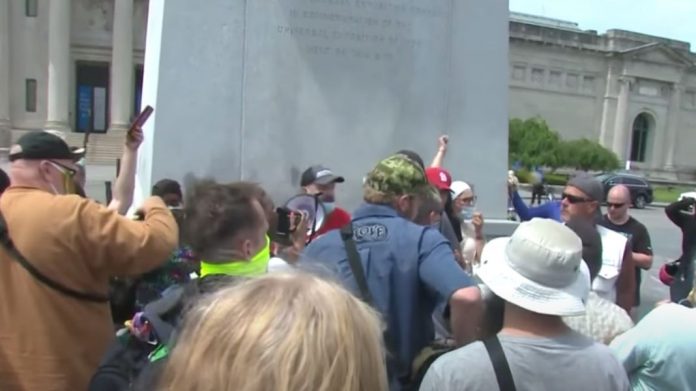 For weeks, Black Lives Matter has been destroying American history.

But their hatred for America seems to extend even further.

And Black Lives Matter just declared all-out war on the Catholic Church after what happened in St. Louis.

Things got wild in St. Louis over the weekend.

The most notable event was on Sunday when two citizens in an upscale neighborhood had to hold off a mob of Black Lives Matter rioters in their neighborhood after they broke down a wrought iron gate and crossed into their private property.

But less than a mile from that home, another incident happened on Saturday, which shows just how much disdain they have for Americans.

A radical Muslim activist named Umar Lee announced a plan to remove a statue to French King Louis IX, who is a Catholic Saint, and the city’s namesake.

One of the most notable monuments in St. Louis is a statue to him, which sits atop a hill.

That statue was actually on the original flag of the city of St. Louis, making it perhaps the most notable monument besides the Arch.

After this call came to remove the statue, Catholics in the city announced their opposition and planned daily prayer events where they prayed the Rosary around the statue.

One of those events occurred on Saturday.

In response, Umar Lee announced a counter-rally, claiming that the Catholics praying were actually racist members of the Ku Klux Klan, a claim mirrored by officials in the St. Louis government with no evidence.

According to The Gateway Pundit, who advertised Saturday’s prayer rally, the mob quickly turned violent, harassing those praying with threats of violence and noisemakers to try to drown out their prayers.

The entire event was recorded on video:

Following the rally, a few Catholics stuck around to pray, and take down hateful chalk messages on the statue.

That’s when the mob turned especially violent, with Black Lives Matter radicals going on the attack, viciously assaulting one elderly man, and two others who tried to defend him.

So far no charges have been pressed on the main attacker, who local St. Louis news reports as being named as Terrence Page.

St. Louis officials are known to let violent rioters free, with their Circuit Attorney (chief prosecutor) Kim Gardner, who receives money from George Soros, letting them off without charges.

Do you think the attackers should be thrown in jail? Share your thoughts with Culture Watch News in the comments below.