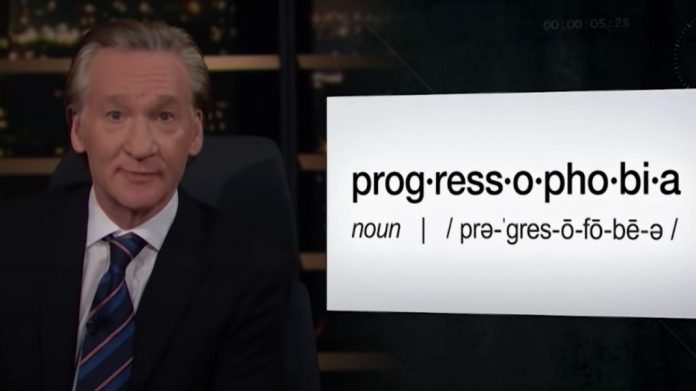 When most people think of Bill Maher, words like loud, inappropriate, and crass likely come to mind.

Many associate Maher with a more liberal political view, but as of late, the stand-up comedian and late-night TV host has been rather outspoken about his disgust with those on the far-left.

And recently, Bill Maher took on the far-left again, and you won’t believe what he said this time.

Bill Maher does not discriminate when he picks on people.

Left, Right, or Center everyone is a target in Maher’s world.

In May of this year, Bill Maher said that “Democrats suck the fun out of everything: Halloween, the Oscars, even childhood.”

During the same piece on his show, Maher bemoaned how the Left is becoming increasingly more rigid, and the Right seems to be loosening up.

Now Maher is lashing out at liberals and accusing them of “progressophobia.”

Maher believes that the Left is refusing to acknowledge how far America has already come.

The late-night host tweeted out to his millions of followers that those who believe America is more racist now and more sexist now than ever before should “adjust” their masks “because it’s covering your eyes.”

Maher explained that “progressophobia” is a phrase that was coined by Steven Pinker, a Canadian-American psychologist, that describes a brain disorder that strikes liberals and makes them incapable of recognizing progress.

“It’s like situational blindness, only what you can’t see is that your dorm in 2021 is better than the South before the Civil War,” said Maher.

He went on to say that the idea being peddled by the Left that things are so much worse now than they ever have been is ridiculous.

“And yet, there is a recurrent theme on the far-left that things have never been worse,” Maher said, pointing to a statement from actor and comedian Kevin Hart claiming, “You’re witnessing white power and white privilege at an all-time high.”

Maher didn’t ignore the idea that there are real problems in the world, but he continues to loudly proclaim that they are nothing like what they used to be.