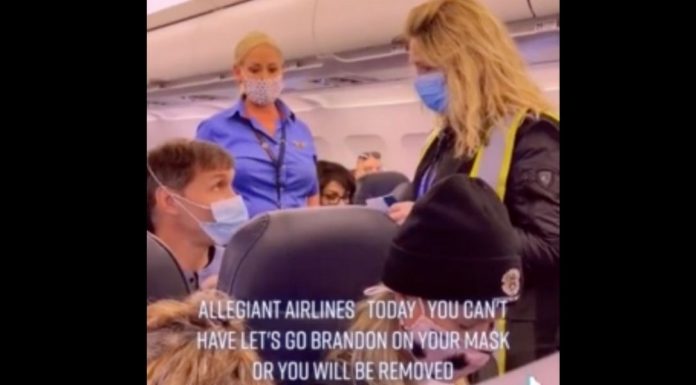 President Joe Biden and Dr. Anthony Fauci made quite the rights-stealing tag team.

And unhinged leftists roaming in public have been their biggest enforcers.

So Biden will be proud of this airline kook’s caught-on-camera act of deception against a Conservative passenger.

Mask mandates continue to muzzle Americans all across the United States.

And one airline passenger just found out the hard way it’s not enough to wear a mask if the Woke Mob doesn’t approve of what your mask says.

A stewardess for Allegiant Airlines has been caught on tape violating one of her passenger’s constitutional First Amendment rights.

As you can see in the video, the flight attendant is caught red handed hassling a passenger about his mandated mask.

The man is clearly wearing a mask of the same style as the attendants.

But that’s not good enough.

Reportedly it’s because the man wrote, “Let’s go Brandon,” on his mask.

The phrase appears to have really triggered the woman, as she tries to force him to change out his mask.

She can be heard denying the man the right to record the conversation.

The stewardess then goes on to say FAA regulations require that he change his mask and then kicks him off the plane when he refuses to switch out muzzles.

But even the airline’s own statement on the incident contradicts their employee’s statement.

“The video in question depicts part of an incident involving a passenger who failed to comply with repeated crew member requests to adhere to the federal face mask policy. The passenger was removed from the flight and issued a refund for his fare. Disregarding instructions from flight crew members is prohibited by federal regulations and is grounds for removal from a flight where such conduct creates an unsafe environment. […] In April, the FAA adopted a zero-tolerance policy against unruly passenger behavior, which includes failure to comply with crew members’ instructions.”

The statement from Allegiant Airlines clearly states the regulation the man violated had nothing to do with the language on his face diaper.

The only regulation the passenger violated was not complying with the attendant’s orders.

However, the bigger question is, what gave this stewardess the right to require he change masks simply because she doesn’t approve of what it reads?

The Constitutional answer – none.

What else can a flight attendant force you to do – with no FAA regulations backing them – with the consequence for non-compliance being removal from your flight?