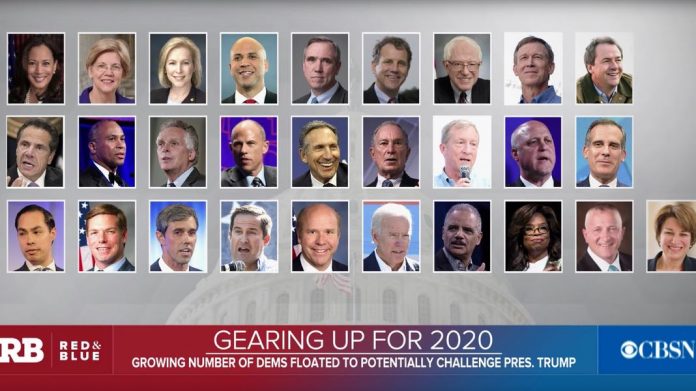 The 2020 Democratic front-runners are all desperate to prove to primary voters how “woke” and Left-wing they are.

In order to prove their “progressive” credentials, they’re adopting extreme policies to appeal to the radical LGBT movement.

Now Biden, Warren, and Sanders have all decided to team up and force high school girls’ sports teams to do something will make you sick to your stomach.

The LGBT movement has made government schools a #1 target for implementing their agenda.

And all the Democrats running for President have agreed to help them shove their deranged ideas down every high school student’s throat.

These candidates are supporting the “Equality Act,” which will force public schools to expand their girls’ sports teams and make them include boys who have decided to dress and act like girls.

Democrats have made girls’ sports a 2020 campaign issue, but establishment media outlets are keeping their viewers and readers in the dark.

Every Democratic frontrunner has pledged their support of the Equality Act, which would make “gender identity” a protected characteristic under federal anti-discrimination law. Among other things, the bill would force public schools to expand female athletic teams to include biological males who identify as transgender girls.

Every Democratic frontrunner for president has pledged their support for the bill, which passed the House in May with unanimous Democratic support. But when establishment media outlets have covered the Equality Act in relation to the 2020 election, the girls’ sports issue has gone missing.

The media is not reporting on the truth about this deranged piece of legislation.

They want viewers to believe that these candidates are simply promoting so-called “gender equality,” but they’re concealing their real agenda.

The LGBT movement is using this legislation to seep into the public education system.

The sick part of this bill is that it will allow boys to sneak into girls’ locker rooms and be protected under the law to do so.

Liberals are tricking parents into believing that this legislation will be good for their children.

But they fail to inform parents that these boys will be able creep on their daughters in gym locker rooms.

Do you think voters would oppose this bill if they learned about the secret LGBT agenda hidden inside of it?