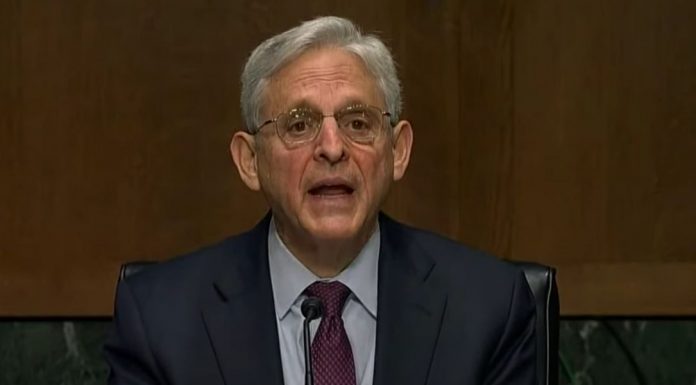 Attorney General Merrick Garland thought he was off the hook.

Because the Biden administration Attorney General just got slapped with the one lawsuit he fears most.

If Attorney General Merrick Garland thought he was off the hook over his order that law enforcement address the “criminal conduct” of parents, he should think again.

But the Department of Justice is attempting to bury the emails and communications that prompted the memo’s creation and that may implicate the Attorney General in crimes.

Now, a watchdog group has sued the FBI for access to documents surrounding Garland’s CRT memo.

Conservative watchdog group Judicial Watch announced Monday that it filed a Freedom of Information Act (FOIA) lawsuit to get a hold of the records about Garland’s memo that instructed law enforcement to “address the rise in criminal conduct directed toward school personnel.”

The memo by Merrick Garland set off a firestorm of angry parents across the country and they are still demanding answers and still, quite frankly, angry.

The memo, which was titled “Partnership Among Federal, State, Local, Tribal, and Territorial Law Enforcement to Address Threats Against School Administrators, Board Members, Teachers, and Staff,” stated that there has been a “disturbing spike in harassment, intimidation, and threats of violence against” school employees.

According to reports, Judicial Watch sought to obtain documents related to the memo through a FOIA request in October of 2021, but the FBI never responded.

“The Biden administration wants to target parents as ‘terrorists’ by abusing the FBI and DOJ to intimidate parents who oppose the racist and anti-American Critical Race Theory agenda… Now Judicial Watch had to file a federal FOIA lawsuit because the agencies are in cover-up mode over this shocking abuse of power,” stated Judicial Watch president Tom Fitton.

None of this comes as a shock since government schools are nothing more than brainwashing institutions for the Left.

Democrats do not want parents involved in their children’s education, they have made that as clear as day.

They know they can’t brainwash these vulnerable kids if parents know what’s being taught in the classroom, so what better way to remove parents than to accuse them of crimes.

The only real crimes being committed here are the ones by the Biden administration and teachers’ unions across the country that are trying to indoctrinate some of the most vulnerable among us.