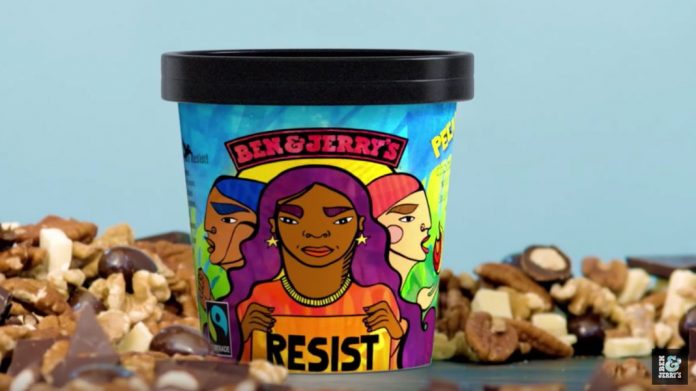 But the dynamic duo behind the Vermont-based ice cream company are also avowed socialists.

And their latest ice cream is going to make many Americans sick to their stomach.

The new ice cream is called, “Pecan Resist,” a flavor to support social justice warriors across the country to oppose President Trump.

Today we launch Pecan Resist! This flavor supports groups creating a more just and equitable nation for us all, and who are fighting President Trump’s regressive agenda.

We cannot be silent in the face of the President’s policies that attack and attempt to roll back decades of progress on racial and gender equity, climate change, LGBTQ rights, and refugee and immigrant rights – all issues that have been at the core of our social mission for 40 years.

This pint packs a powerful message under its lid: together, we can build a more just and equitable tomorrow. We can peacefully resist the Trump administration’s regressive and discriminatory policies and build a future that values inclusivity, equality, and justice for people of color, women, the LGBTQ community, refugees, and immigrants.

USA Today reported Ben & Jerry’s intends to donate $25,000 each to radical leftist groups, including the “Women’s March,” “Color of Change,” “Neta,” and “Honor the Earth.”

What are your thoughts about the company’s decision to mix politics with its ice cream?

Will their announcement change your decision about whether or not to buy Ben & Jerry’s ice cream?