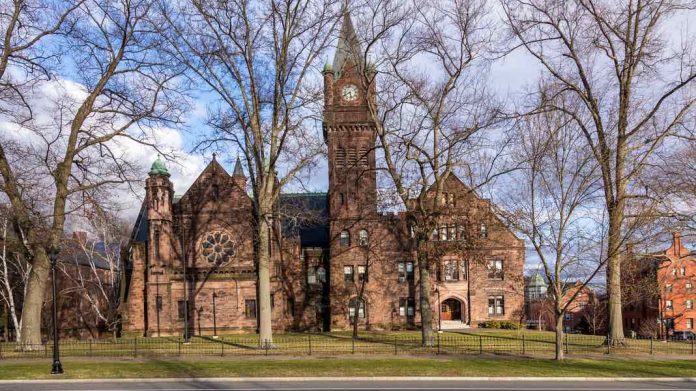 Parents shelling out big bucks to send their kids to a Christian college probably think they’re protecting them from “woke” propaganda.

They couldn’t be more wrong at some schools.

Because believers are outraged over what these Christian university heads are doing to their institutions.

It turns out, several Christian higher education institutions are embracing everything from gay romantic relationships to Critical Race Theory (CRT).

And the lengths some heads of Christian universities are going to to push leftist propaganda rivals even efforts by secular institutions.

One of the most well-known Baptist universities is giving CRT creators a run for their money when it comes to developing ridiculous theories.

“If one were setting out to create a parody of CRT propaganda,” Bashman writes, “her suggestions wouldn’t look much different, linking to a list of “white supremacist” characteristics that include individualism, logical thinking, and, for some inexplicable reason, memo writing.”

Meanwhile, Azusa Pacific University is endorsing same-sex romantic relationships. The Los Angeles based university, which bills itself as a top pick for Christians, keeps issuing memos as it waffles on exactly what it’s stance on same-sex couples on campus allows.

Through it all, one thing remains consistent: the university’s approach is anything but conservative.

According to Christianity Today the school went back and forth on whether to allow same-sex couples to date in 2019, before ultimately settling on removing a ban on “romanticized” same-sex relationships from the students’ required code of conduct.

“APU is an open-enrollment institution, which does not require students to be Christian to attend, and the handbook conveys our commitment to treating everyone with Christ-like care and civility,” APU provost Mark Stanton told Christianity Today. “Our values are unchanged, and the APU community remains unequivocally biblical in our Christian evangelical identity.”

Bashman wrote about how a friend working at the university told her the administration sent out “a school-wide notice to teachers asking them to make a ‘commitment to read, watch, or listen’ to resources on ‘Allyship and Anti-racism.’ The recommendations read like an enthusiastic endorsement of Critical Race Theory (CRT), including everything from Robin DiAngelo’s White Fragility, to the New York Times’ 1619 Project to Ibram X. Kendi’s How to Be Anti-Racist.”

With all these competing worldviews, administrators at Azusa might need to update their “God First” motto to better reflect their current priorities.

Parents should stop shelling out to send their kids to schools like Baylor and Azusa unless there are some major changes.