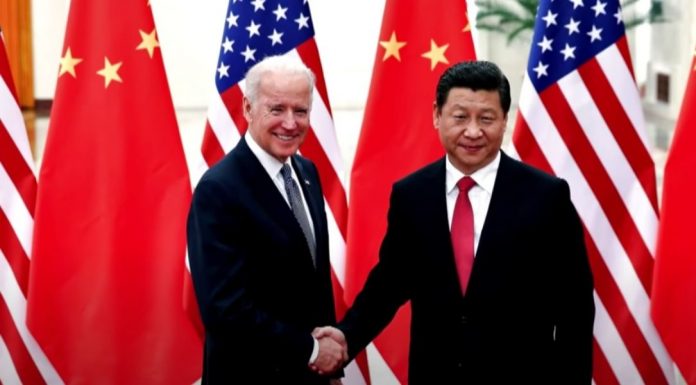 Biden’s relationship with China was a hot topic this past presidential election cycle.

And he loves to remember the good times he had with one of our biggest adversaries in the world.

But as clueless Joe Biden reminisces about visiting China, Chinese diplomats disrespect his administration like never before.

Every election has unique hot topics specific to the candidates.

And in 2020, Biden’s relationship with China was a hot topic for Trump to hit on.

His son Hunter Biden made millions in China off of his shady business deals.

And there was even a concern about Joe Biden being a party to a business deal in one of Hunter Biden’s Chinese endeavours.

But, with the help of the Fake News Media, Joe Biden never had to face the criticisms of his relationship with China head on.

No matter how much Trump brought it up, the press just ignored it.

And social media platforms even refused to allow stories of Hunter Biden’s deals in China by claiming they were “fake news.”

But after President Biden won the election, it came out that there is some validity to the claims of corruption in Biden’s family in Chinese business deals.

And Biden is now openly reflecting on his cherished times while in China.

While at the Center for Disease Control and Prevention, President Biden told the press, “I was with Xi Jinping of China, spent more time with him I’m told than any world leader because he was vice president, I was vice president. His President and mine wanted us to get to know one another because it was clear he was going to become President.”

Then Biden talked about a private conversation he had with President Jinping and claimed, “he asked me right on the Tibetan Plateau, he asked me, he said to me, ‘Can you define America for me?’ I said, ‘Yeah, one word. And I mean it. One word: possibilities.’”

But while he was reflecting on his private time with the head of the Chinese Communist Party, Biden’s administration was getting verbally spanked by a Chinese delegation.

After Blinken tried to half-heartedly go after China for human rights abuses and using its force in the world to undermine U.S. interest, senior officials from China had had enough.

Later on Yang continued to scorn Biden’s delegation by stating, “So let me say here that, in front of the Chinese side, the United States does not have the qualification to say that it wants to speak to China from a position of strength.”

You can see a video of part of the exchange below: