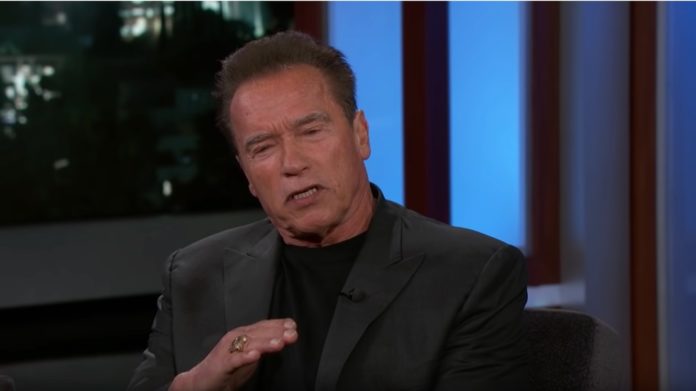 Immigrants who come to the U.S. for a better life should at least respect their country.

But too many love to trash the country they fled to.

And Arnold Schwarzenegger is in hot water after he made this anti-American statement.

Arnold Schwarzenegger often claims that moving to the United States was a dream of his.

Growing up in Austria, with a father who served as one of Hitler’s Brownshirts in World War II, he knew that immigrating to the United States was his best bet to be successful.

And that he did.

He became an award-winning body builder, Olympic weightlifter, movie star, and Governor of America’s largest state, along with operating a number of successful businesses.

But now he spends much of his time putting out videos attacking Republicans, and in a recent video, the freedoms that he has enjoyed in the United States, which allowed him to be successful in the first place.

In the video, the former Governor ranted about those who oppose mask mandates, at one point yelling “screw your freedom.”

He began his rant by claiming that if you refuse to wear a mask, you risk infecting people with coronavirus, putting them at risk of dying.

This is despite the fact that it has been proven that masks, especially the cheaply made ones most people are wearing, don’t actually do much, if anything to stop the spread of coronavirus.

In response to those who don’t wear masks in public, he then said, “Screw your freedom,” before likening mask mandates to traffic laws: “You cannot say, ‘No one is going to tell me that I’m going to stop here, that I have to stop at this traffic light here. I’m going to go right through it.’ Then you kill someone else, and then it is your doing.”

In response to this, he unsurprisingly faced backlash.

REDCON1, who makes bodybuilding supplements, even went so far as to announce they would no long support Schwarzenegger’s bodybuilding competition, the Arnold Classic, over his comments.

“We elected to discontinue support due to Arnold’s [Schwarzenegger’s] comment, ‘Screw Your Freedoms,’” a company spokesperson said in a statement to The Hill. “With the global influence Arnold beholds we find that ideology dangerous and anti-America and community.”

REDCON1 founder Aaron Singerman additionally added, “Anyone who says ‘screw your freedoms’ is un-American, and REDCON1 is a patriotic pro-freedom brand. We support freedom of choice.”