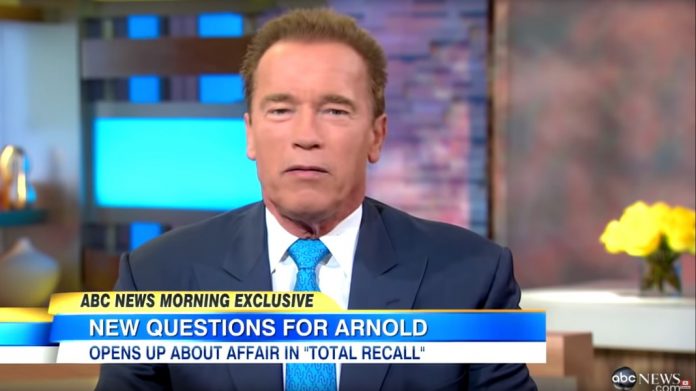 Arnold Schwarzenegger has made it a point to be a thorn in Donald Trump’s side since Trump announced his campaign in 2015.

At times, his jealousy of President Trump becomes quite pathetic and even sad.

And Schwarzenegger just terminated his legacy with this embarrassing interview that will make you rethink ever being a fan of his.

Because Arnold Schwarzenegger has become such a radical Leftist, it is difficult to remember he once served as the Governor of California as a Republican.

But his time spent in office was a total failure.

Since then, his political activism has consisted of promoting the climate change scam and bashing President Trump.

Now, in a recent interview, Schwarzenegger revealed he wishes he could run for President against Trump but cannot due to his place of birth.

Austrian-born actor Arnold Schwarzenegger is still lamenting the fact that the U.S. Constitution bars him from running for president because he was born in a foreign country.

In an interview with British talk show host Graham Norton conducted just ahead of the release of the next iteration of the Terminator series, Schwarzenegger expressed his frustration that he is barred from making a run at the highest office in the land, the Daily Mail reported.

Arnold Schwarzenegger, who came to the U.S. in 1968 at the age of 21, became a U.S. citizen in 1983. But because he is not a natural-born citizen, the Constitution bars him from becoming president.

“Of course,” the Terminator star said when asked if he was disappointed that he could never become president. “It would have been great to jump in and run.”

Schwarzenegger clearly believes he could somehow topple President Trump if he could run for President, but offers zero evidence as to how he would do so.

This is just another pathetic jab at the President.

The failed governor could never actually take on President Trump.

Even when he took over Trump’s former TV show, “The Apprentice” ratings dipped and the show was forced off the air.

Are you tired of Arnold Schwarzenegger bashing the President?