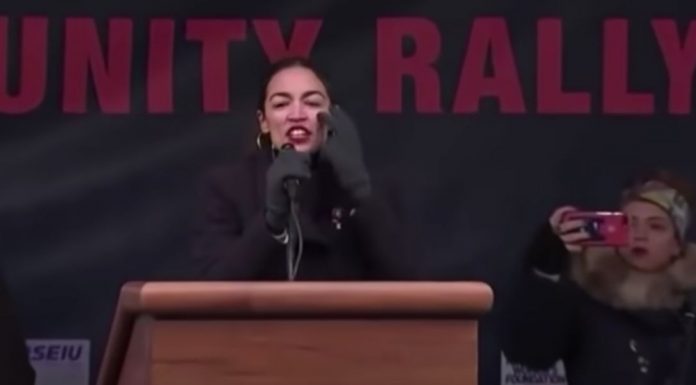 Alexandria Ocasio-Cortez can’t help but make a fool of herself.

She clearly wasn’t prepared to serve in Congress.

And she just said two words on CNN that made her a laughing stock to everyone in America.

The left’s “woke” agenda is out of control.

They have gone to jaw-dropping extremes in an attempt to be “politically correct” under their ever-changing standards.

Pretty much any Democrat would be cancelled if the views they espoused just five years ago were put under the leftwing spotlight today.

That’s because today, things like gender are entirely different.

The term “man” and “woman” don’t mean what they meant a few years ago to them.

Today leftists say everyone can choose whatever gender they want to be, and once they do, everyone else has to accept it.

That means that it is possible for men to become pregnant in the insane world the left lives in now.

When Rep. Alexandria Ocasio-Cortez went on CNN to talk about Texas’ law that effectively bans abortions after six weeks, she took the left’s anti-biological science insanity to a whole new extreme.

She went on to ramble about how the bill doesn’t actually ban abortions at six weeks:

“It’s that, quote unquote six weeks, and I’m sorry we have to break it down on — break down Biology 101 on national television, but in case no one has informed him before in our life — in his life, six weeks pregnant means two weeks late for your period. And two weeks late on your period for any person, any person with a menstrual cycle, can happen if you’re stressed, if you’re diet changes, or for really no reason at all. So you don’t have six weeks.”

While most of America believes what Ocasio-Cortez said is insane, the left eats it all up.

They seem to be competing to see who can be the most “woke” in their terminology.

There is no telling how far they will take it next.

Culture Watch News will keep you up-to-date on any developments in this ongoing story.