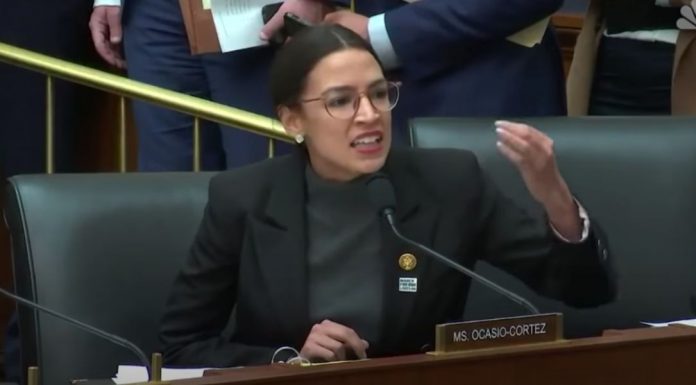 The cancel mob lives up to it’s name.

First they cancel whatever it is they don’t like, then the mob raises hell about something they claim “intersects” with it.

That’s why AOC had zero problem canceling one holiday and Americans were shocked at the “day of reckoning” rabid left-wing activists held instead.

The Left love’s to trot out American Indians. Which is surprising given they canceled the Washington Redskins.

But like clock-work, they’ll be raging about blankets or something every year when Columbus Day rolls around.

With Joe Biden and Democrats in charge in Washington, D.C. they officially canceled Christopher Columbus and instead held so-called “Indigenous Peoples Day” – or what The Harvard Gazette deemed a “day of reckoning.”

Based on the Left’s reaction to the events at the Capitol on January 6, you’d have to call the leftist mob that descended on Washington, D.C. on their “day of reckoning” an insurrection.

Of course, you won’t hear a peep from Alexandria Ocasio-Cortez and the Fake News Media about this “insurrection”

We have been bombarded with news about the supposed “insurrection” of the Capital on January 6th.

But those same Leftists that are claiming the sky was falling back then are silent now as a Woke mob takes over and occupies parts of Washington, D.C.

The Department of Interior was taken over by Leftist activists, but you won’t hear a peep from the Fake News Media about this “insurrection”.

One of the most overrated stories of the year is the events at the Capitol on January 6th.

The Left milked that event like no other and didn’t let the fake “crisis go to waste.”

We heard that a mob killed a cop.

Turns out that isn’t true.

Then the Fake News Media claimed that the people in the Capitol were violently ravaging the halls of Congress.

Turns out the Justice Department is struggling to prosecute people for violence with lack of evidence.

Nearly every narrative about that day has fallen apart in front of the Fake News Media’s eyes without a peep.

But the sad thing is they are all silent when an actual attempt to hamper our federal government takes place.

This past week climate change extremists decided to storm Department of Interior buildings in Washington, D.C.

A group of Leftists called People Vs. Fossil Fuels are demanding that Biden declare a state of emergency over climate change to end the fossil fuel industry in the United States.

And when they tried to enter into buildings in Washington, D.C. they got pissed and tried to force themselves in.

We are at the White House with a clear message.

Climate protesters are now rallying outside the Department of the Interior. They’re trying to get inside but police are blocking the entrance. I can see a few Indigenous women through the doorway who are sitting on the floor inside the building and linking arms. pic.twitter.com/gDNamGAWiH

And after screaming and shoving the police they were able to storm into the building.

Climate protesters are pushing police, trying to force their way into the Department of the Interior where other activists have made it inside in an attempt to occupy the building. pic.twitter.com/IVhvPdTAYu

But not only did they storm into buildings, they also staged “sit-ins” to stop the government from doing its business.

BREAKING: Indigenous Leaders are occupying the Bureau of Indian Affairs in DC for the first time since the 1970's. #PeopleVsFossilFuels

On January 6th it was classified as an insurrection, last week it was completely ignored.

Just another example of the Fake News Media lying and spitting in your face.

We’ll see if Merrick Garland’s Department of Justice prosecutes anyone over this, but don’t count on that.