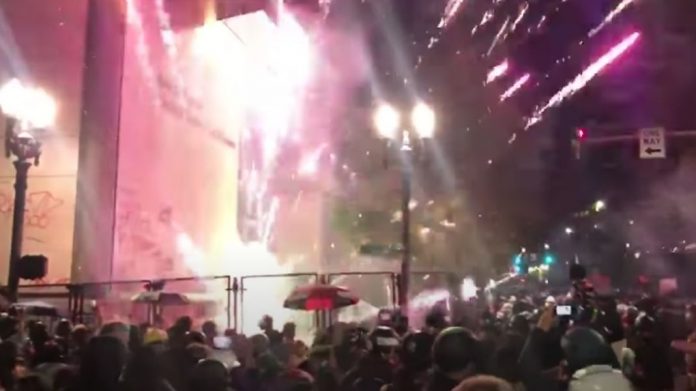 They truly are the real intolerant ones, who will attack anybody who disagrees with them.

And Antifa and BLM’s war on Christians just ramped up with a horrifying bloody attack.

As an organization, Black Lives Matter is directly opposed to Christianity.

One of their top goals is to eliminate the nuclear family, and they promote the LGBT agenda.

In recent months, since the death of George Floyd, there have been many attacks on Christians, with churches being burnt down, and people of faith being viciously attacked.

These attacks came after Black Lives Matter leader Shaun King called for the destruction of white Christian symbols, including depictions of Jesus being white.

As is easy to understand, these attacks on Christian symbols don’t take long to shift to attacks on actual people.

This played out in Portland, Oregon in recent days.

Tayler Hansen, who is known for placing “Baby Lives Matter” murals on the streets in front of abortion mills was walking around the streets during one of the Black Lives Matter/Antifa riots.

While walking, he was spotted and identified as a conservative.

After being spotted, he was stalked, and eventually assaulted by the Left, being punched and kicked until bloody.

“It started with a press member recognizing me, he proceeded to get his phone to show a group of Black Bloc what I believe to be my Instagram,” Hansen recalled. “I fled and changed my disguise, and returned once they had arrived at a different location.”

Hansen has become well known in recent weeks as his murals have gained viral attention, being seen millions of times online.

If anything, Black Lives Matter should be appreciating his work, considering that abortion mills disproportionately kill black babies, having killed millions in recent years.

But they don’t really care about black lives, and are instead simply about supporting the radical Left, who’s ideas will disproportionately harm the black community.

Abolishing the police will harm black people more than anything, despite BLM claiming to be pushing for it to help them.

So just because stopping abortion would help the black community more than anything doesn’t mean they will support it.

And it is clear that their enforcers will even go so far as to attack anybody who pushes for it.