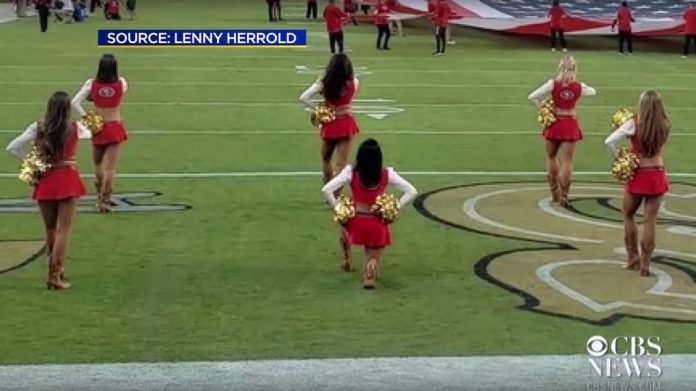 Colin Kaepernick’s antics have poisoned the NFL with leftist politics.

His disrespectful anthem protests set a horrible precedent that severely damaged the NFL’s ratings all around.

And Americans are outraged after what one NFL cheerleader just did.

Before the Thursday Night Football game between the San Francisco 49ers and the Oakland Raiders, a 49ers cheerleader was seen kneeling during the national anthem.

A cheerleader for the 49ers took a knee during the national anthem prior to San Francisco’s 34-3 win over the Oakland Raiders on Thursday Night Football.

The cheerleader, who has not been identified at this time, was following in the kneeprints of former 49ers quarterback Colin Kaepernick, the first NFL player to kneel during the playing of the anthem.

One of the Niners cheerleaders is taking a knee. pic.twitter.com/DW5SJqh9zj

The unnamed cheerleader is the first NFL cheerleader to pull this stunt during the national anthem.

Colin Kaepernick, who used to play for the 49ers, was the player who started all this nonsense when he began protesting during the national anthem in 2016.

And of course, the leftist media lavished him with praise. Even though he would give interviews wearing socks that depicted police as pigs, or a shirt in support of communist dictator Fidel Castro.

The national anthem is a time to stand in unity with your fellow Americans with respect for, and in honor of the flag and the country it represents.

And most Americans know and agree with that.