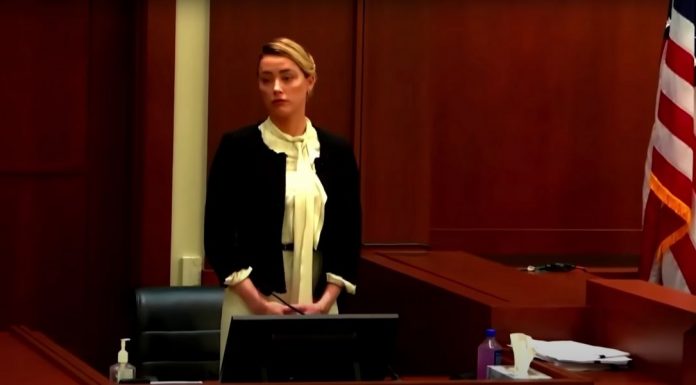 Court is one place where perceptions matter a lot.

Getting caught in any improper act in court can lead to big consequences.

So jaws dropped when Amber Heard got caught in this one act live on-camera during her messy legal drama.

Hollywood actors Johnny Depp and Amber Heard are currently in the middle of an ugly court case.

Depp is suing ex-wife Heard for defamation after she accused him of domestic abuse in 2018 in an op-ed for The Washington Post.

The trial is not going well for Heard.

So bad in fact, the internet is speculating she actually just took narcotics to cope with it.

Blaze TV host Chad Prather tweeted “Yo sis. What you doin?” after courtroom video showed Heard appearing to snort something from a handkerchief during the trial.

Yo sis. What you doin? pic.twitter.com/3svtTEiYRb

The speculation over what Heard may have ingested live on camera is the latest humiliation for Heard as the legal drama has played out.

It follows the admission that her 2018 op-ed for The Washington Post, in which Heard detailed her alleged abuse, was actually ghostwritten by the American Civil Liberties Union (ACLU).

Now, members of the organization are upset that Heard never paid them the donation she promised.

The Daily Wire reported that “emails released in court show ACLU communications strategist Robin Shulman wrote the first draft of Heard’s op-ed in November 2018, one month before it was published… Shulman told Heard in a message that she tried to ‘gather your fire and rage’ and turn it into an op-ed. Dougherty was asked in his deposition whether that ‘rage’ was related to Depp, but said it was related to ‘gender-based violence issues.’”

The op-ed accused Depp of domestic violence without specifically naming him because Heard signed a nondisclosure agreement.

The op-ed was also scheduled to be published in conjunction with the release of Aquaman, in which Heard had a major role.

Gerry Johnson, a member of the ACLU communications team, sent to Heard’s reps in an email, “Since draft turned out pretty strong and Aquaman slated to do large numbers I’m wondering what you think about it?”

But during the defamation trial, it came out that the ACLU only received $1.3 million of the $3.5 million they were promised, and Heard only contributed $350,000.

The other $1 million was provided by Depp and former boyfriend Elon Musk, each of whom paid the ACLU $500,000.

ACLU general counsel Terence Dougherty testified, “We reached out to Heard starting in 2019 for the next installment of her giving and we learned that she was having financial difficulties.”

The revelations from the ACLU further paint Heard in an unflattering light.

Depp has provided audio recordings that show Heard was the physical aggressor against him on many occasions.

She allegedly sliced off part of his finger with glass from a broken bottle.

Needless to say, Heard is not the doe-eyed victim she portrayed herself to be.

If the #MeToo Movement had any steam left, Heard just killed it.